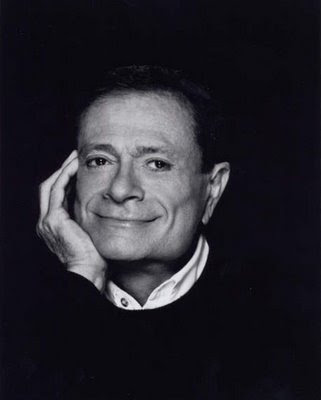 I am so thrilled that the 2009 Tony Award committee has decided to honor Jerry Herman with a special Tony for Lifetime Achieve-
ment.
In 2002 Mr. Herman opened up his home for interviews, just around the time that his concept CD Miss Spectacular was released. Also at that time he made a rare appearance with the Gay Men's Chorus of Los Angeles for an evening called Jerry's Boys.
Here is our interview, originally published in NoHoLA in the July 4, 2002 issue.
Q: How do you account for the incredible fame of the song "Hello Dolly"?
JH: The interesting thing about me is that it sounds like I intended all those songs that people know ... to be popular songs, but I honestly did not. The biggest surprise to me was "Hello Dolly". It was written for a very emotional moment where a woman is returning to the human race after mourning her husband for many years. She puts on her finery, comes down a staircase and says, "Hello, Harry!" "Well hello, Louie!" It's very 1890s. And Louis Armstrong is the reason that that's a popular song. He saw something in it and made a jazz classic out of it.
Q: One of my favorite shows is Dear World. The music is just enchanting. Why do you think it bombed back in the 60s?
JH: It was a charming idea that was so overblown. By the time the show opened, it was no longer a little chamber piece that Lawrence, Lee and I had intended. But it became a huge Broadway show in one of the biggest theatres at that time, the Mark Hellinger. I wanted a seven-piece ensemble to play it, and we had a huge, huge orchestra and chorus - and klunky big sets. It was not what I wanted, but now I have a second chance with that.
Q: There's a new production in the works. What changes did you make?
JH: We started to pare it down. We've gone a little further and have beautiful new orchestrations. It's going to play Sundance in Utah, and Maureen McGovern is going to sing it. When you hear these songs come out of her, it's really something gorgeous.
Q: Speaking of new productions of oldies but goodies, what's the latest on Mack and Mabel's move toward the Great White Way?
JH: We'll open it in Texas and have producers come and look at it.
Q: What's been the greatest problem in remounting it?
JH: Getting the book straightened out. We have it now. Michael Stewart's (now deceased) sister has done a beautiful job of making it tighter and clearer and more romantic. I love the new ending.
Q: Miss Spectacular is a breath of fresh air. How did that come about?
JH: I was commissioned to do a revue for Las Vegas where they wanted huge production numbers from me with a little storyline that went through it. So I made up this whole idea and did it, and just as the show was about to be mounted, the man that had commissioned it sold his entire interest to MGM, and my contract went along with it. MGM didn't have a venue for it, because they're doing FX.
This is a nice show business stroy: very kindly they called me and said, "We would like to return the rights to you". When they did that, I released the album that we had done, because I just wanted the world to hear the songs. Nancy Dussault is guesting with the Gay Men's Chorus and will perform "Where in the World Is My Prince?" This will be the first live performance of the song, recorded for the concept album by Faith Prince.
Q: How did you feel about the film version of Mame?
JH: I hated it more than any performance of mine that I've ever seen. I'd like to burn all those films.
Q: By films, you're referring to Hello Dolly as well?
JH: I don't hate Hello Dolly; it's just not the Hello Dolly that I opened in 1964. It's about a young girl (the film) ... who for some reason (he rolls his eyes) ... is a matchmaker.
Q: Do you envision yourself composing another big musical?
JH: Oh, I certainly do. I feel great. I've got all the energy in the world. It's just a question of finding material that you want to live with for the rest of your life. I've been blessed with The Matchmaker, Auntie Mame and the original La Cage Aux Folles, the play. The three of those pieces of material are such a foundation that it was hard not to write a good show. Finding that is not as easy as it sounds. I would do another one if I found at least a character that I fell in love with.
Posted by Don Grigware at 3:25 PM No comments:

4 MAY 09: Co-Artistic Directors Taylor Gilbert and Sam Anderson of The Road Theatre Company have announced the next presentation from the ever-ambitious company, where the long-extended west coast premiere of Keith Huff’s The Bird and Mr. Banks plays on to appreciative crowds and critical acclaim through May 16.

Opening at the Road on Friday, June 19 is Emmy and Drama Desk-nominated writer Craig Wright’s THE UNSEEN, which debuted at the Actors’ Theatre of Louisville’s Humana Festival 2007 and concluded a much-heralded off-Broadway run at the Cherry Lane in March. THE UNSEEN expands the Road’s association with Wright, as the playwright will make his directorial debut at the Road, continuing the company’s artistic collaboration with one of the American theatre’s most talented writers. The multi-award-winning company’s 2008 west coast premiere of Wright’s Lady received four Ovation Awards and five LA Weekly Award nominations, garnering two LaWee wins, including Best Supporting Actor for Matt Kirkwood, who will also be featured in THE UNSEEN.

Last season’s subsequent New York debut of Lady was recently nominated for a Drama Desk Award as Outstanding New Play and received a nomination for Chicago’s Joseph Jefferson Award. Wright’s other works for the stage include The Pavilion, also a Drama Desk nominee in 2006; Main Street; Orange Flower Water; Recent Tragic Events; Molly’s Delicious; Melissa Arctic, which won Washington, DC’s Helen Hayes Award for Outstanding New Play; Grace, a nominee for the Hayes Award and, for L.A.’s Furious Theatre, winner of the LA Drama Critics Award for Best Play and a TicketHolder Award for Wright as Best Playwright of 2006. Wright is the recipient of fellowships from the McKnight Foundation and the National Endowment for the Arts, and holds a M.Div. degree from United Theological Seminary. He has written for numerous television shows, including his Emmy-nominated work as Executive Story Editor for Six Feet Under; Supervising Producer for Lost; Co-Executive Producer for Brothers and Sisters; and he was the creator and Executive Producer of the ABC series Dirty Sexy Money.

THE UNSEEN is a Kafka-esque, darkly humorous examination of faith in an uncertain world, a curiously fascinating psychological thriller about two prisoners (Matt Kirkwood and Darin Singleton) incarcerated by a totalitarian regime. Mercilessly tortured for unknown crimes and living without hope of escape or release, they desperately try to crack the code of their cryptic imprisonment. Only familiar to each other by voice as they cannot see one another, the men try to keep mentally and emotionally stable through their cell walls by sharing stories of their interrogations and torture, putting the pieces together about their captors, and attempting to devise a plan of escape.

The puzzle is further complicated with the introduction of a new prisoner placed between them, who only poses more questions than answers, and a childish yet sadistic guard (Douglas Dickerman) who seems to regret his job as resident torturer as much as he relishes talking about the details of it. As noted of the Cherry Lane production in TimeOut New York Magazine, “[THE UNSEEN] demonstrates what the Greeks always knew: If the writing is good enough, violence needn’t be seen to be believed.”

THE UNSEEN opens Friday, June 19, playing Fridays and Saturdays at 8pm and Sundays at 2pm through Saturday, Aug. 22 at The Road Theatre, located two blocks south of Magnolia Bl. in the historic Lankershim Arts Center, 5108 Lankershim Bl. in the heart of North Hollywood’s NoHo Arts District. General admission is $30.00 ($10.00 for special preview performances on June 16, 17 and 18 at 8pm). Visa and MasterCard are welcomed and discounts are also available for senior, student, 3-A union members, and groups. For further information, call 866.811.4111 or log on at http://www.roadtheatre.org/.
Posted by Don Grigware at 6:04 PM No comments: