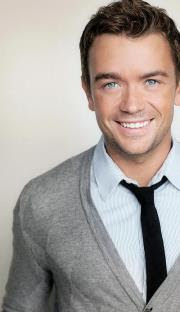 British actor Emrhys Cooper is riding high after a guest appearance on ABC TV's Desperate Housewives and after winning BWW's Person to Watch for 2012 based on his electrifying performance onstage in Entertaining Mr. Sloane. I had to call out a few tricks just to keep up with his amazing energy, but over our lunch he pretty much crystallized his philosophy of acting that will assuredly engulf him in success over the next several years, here ...and internationally.


Let's start with a little background info. Where were you born?


I'm actually from Devon, the southwest of the UK. It has a very small population, a farming town. I moved to London when I was 16 and went to the Laine Theater Arts College on scholarship.  It's a performing arts school,  the British equivalent of Julliard. I trained there for 3 years, got a degree and also learned how to sing, dance and act. I graduated with honors at age 19 and went straight into performing professionally.

You came to the US two and a half years ago, after many credits in London and formed your own production company. Tell me about that.

I've always been very creative, and I kind of feel as an actor you don't just wait for the phone to ring, so I thought, I have entrepreneurial skills and I believe in my many talented friends, and I luckily met some great investors that were interested in pursuing making movies. I set up a production company called Dream It Productions. We think outside the box; I'm not copying, I'm learning myself. We've done two movies since we formed a year ago. I'm not pretending I'm Einstein, but I'm learning as I go. I'm really enjoying producing as well as acting and performing. It gives me a bit of power, it gives me creativity and control...I get to find wonderful directors and writers and actors, and I get to put a whole project together. That's the production side of things. And I was honestly doing that because I wasn't necessarily busy as a performer, but in the last 8 months I've become way more busy performing, and it's been very hard for me to focus on producing. I came here to perform and now I'm back doing it a lot.

When you read a script, what do you look for?


I'm looking for something that is so different, it has to blow me away.I don't believe in mediocre; it has to be phenomenal. There are so many scripts...it either has to get me thinking or...you know 20-30 pages in, don't you? It's hard for me, because a lot of my friends are writers and they pitch me projects. It's hard for me to say no, but by the end of the day, if I'm not interested, I'm not going to lead someone on. I can't take on too many projects; I only want to take on something I really believe in 100%.
Were you influenced by classic films?


To be honest with you, I grew up watching old-time movies. I fell in love with the industry; I fell in love with those actors. I grew up watching the classics; Fred Astaire I watched over and over again. I was more drawn to the classics than to the new films, which was strange. Now I love watching everything. They had such magnificent performances; they were so breathtaking. I don't know if we necessarily have those kind of performances now. There are the occasional ones, but the movies are more effects driven or concept driven. Those long shots, those long scenes were not getting cut; they weren't cut around those things; they were real performances. So I did learn a lot; they've been a huge influence on me.

What about the West End stage? How did it affect you?


I basically grew up in a small town. I remember my first ever experience was watching the Royal Shakespeare Company when I was maybe 12 years old. Before then, I hated Shakespeare. I found it very hard to tolerate, being a kid. My father was a Shakespearean actor and would drag me to the theatre to see Macbeth for example. I've seen every single Shakespeare play probably over 20 times. I mean, it was ridiculous, I hated...

Is your father still acting?


Yeah, he is. He's just done Shylock in The Merchant of Venice. He's really good.

Christopher Cooper...Anyway, it was very embarrassing for me as a kid, as my father was always dressing up in drag, playing random characters, and my friends were always kind of shocked by it. Embarrassing, but then as I got older, I realized that's what I was becoming, and instead of fighting it, I kind of liked it. I remember watching my cousin Hermione Guliford, who actually was the lead in the Royal Shakespeare Company for 10 years, playing in A Midsummer Night's Dream. I was blown away and I remember that was one of the moments when I realized that I was destined to be an actor. I watched countless western shows and musicals. I remember another moment when I was a kid, watching Fame, The Musical and I said to my mom as soon as I finished it, "That's what I'm going to do". And oddly enough my first ever audition out of drama school was for Fame and I booked it. I did the national tour of Fame.

Your mother was a dancer, correct?


She did a kind of dancing called eurythmic, a new age form of dance. She never really performed that much; it was more teaching. Both my parents have performing instincts and were performers at some point in their lives. Luckily, they encouraged me. Some kids aren't as fortunate as I was. They always supported my belief in performing and backed me 100%. I didn't come from much money, but my grandparents supported my dancing; they paid for my acting classes and everything.

How did you happen to pick the play Entertaining Mr. Sloane last season? 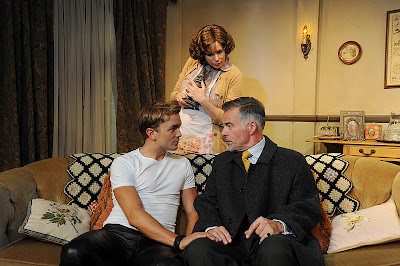 Good question. It's funny, because I actually am friends with Stan Zimmerman, the director. He said he wanted to direct a play and said "Emrhys, I really want to direct you as Sloane in Entertaining Mr. Sloane. You'd be perfect!" I bought the play, read it and loved it. It resonated with me and was so excited about it. It took a bit of time and I let it kind of like grow on me and I kept thinking about it. It took about 8 months and I spoke to a couple of other people about it, and my belief in it and his belief in it and our excitement about it, I guess translated to producers wanting to produce it. Such fantastic actors, and there's just a great energy about it. Stan's number one choice to play Ed was Ian Buchanan. Neither of us knew him; we contacted him through a mutual friend. He said he loved the play, he met him and then he was on board. Stan had been writing a pilot for Olivia (d'Abo) and he loved working with her. When her name actually came up as a British actress, a lot of people said she was too pretty.We thought she was too good-looking to play this dowdy woman. When we met her, she had such energy and passion to play Kath and had such a belief in her and was desperate to play her. She wasn't afraid to look bad; she's a real character actress. And then Robin Gammell came in. Every actor was so behind it. And we had such great chemistry, all four of us, I think that translated on the stage. 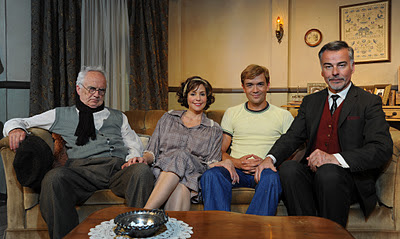 Yes, indeed! And you're going to remount it?


I'm pretty sure it will come back in the next few months due to popular demand.

How does it feel winning the BWW (BroadwayWorld) Award as Person to Watch in 2012?


It's honestly such an incredible feeling. I'm still over the moon about it. I have a thing called a Dream Fund in my house. There are a couple of dreams I'd put in of what I'd like to do in 2012. And one of them was to win an acting award. So, I manifested it. I want people to watch my career and take notice of me, and I'm ready for it. I'm delighted and grateful to everyone who voted for me. I don't know who you are, but thank you!

What else is coming up with Dream It Productions?


In Dream It, there are 2 singer/songwriters and I'm helping to produce their music. I'm kind of managing them in a way. It looks like we may get a couple of other movies made this year. And a movie called The Lucifer Effect, a horror film, is probably coming out this summer.  We're busy and it's evolving into whatever it's supposed to evolve into. A lot of people are getting behind it. Realistically, though, I came to LA to be a performer, and that is my primary focus. Everything else is a secondary thing right now.

You had mentioned the possibility of doing Sleuth on stage. Is that perhaps a plan after the remounting of Sloane?


Yes, Ian (Buchanan) and I are talking about doing it...maybe after Sloane. It's challenging for 2 actors; there are a lot of twists and turns, and the role I play, you get to see the sexy side and the investiga(tive)...you get to see lots of different sides to me and as an actor, that's exciting.
You remind me somewhat of a young Michael Caine. Is he an idol?


I wouldn't say an idol, but I certainly admire him. He's a great actor.

What else is in the works?


I'd love to do a musical. I've done three of them already...maybe next year.

Tell me about the movie you're doing in March in Bollywood?


Kushtura. I'm the first ever Western male actor to go off to Bhutan, near the Himalayas. It's a beautiful love story. It's about an American who thinks he's going to die and he goes over there. It's sweet and romantic. This woman is about to kill herself; basically, I save her, she saves me, and I end up not dying. It has a great happy ending, and, it's not a musical per se, but there's a few song and dance numbers along the way. And the King of Bhutan is one of the producers. I'm very excited about it.

What do you believe is your mission as a performer?

To inspire people to keep believing their dream and just go for it. I'd like them to look at my journey, and see that all my hard work has gotten me to where I am and wherever I'm going. Don't let obstacles get in the way!


Emrhys Cooper is definitely a Person to Watch. He has tremendous talent, drive and ambition. And by the way, like me, he loves The Artist and thinks it deserves to win Best Picture. Watch for this young blazing talent on stage or in a movie theater near you! Emrhys Cooper: I predict great things for him. 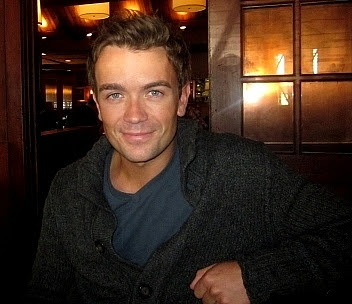 Posted by Don Grigware at 9:03 AM No comments: