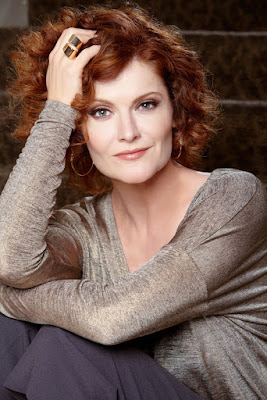 Stage, film and TV actress Rebecca Wisocky, best known for the Lifetime series Devious Maids, is currently onstage at the Geffen in Barbecue. In our chat she discusses the play, Devious Maids and other theatrical interests.

What is all the hype over Barbecue?

Our audiences have been very enthusiastic. I think people have been excited to see a play that is both incredibly funny and sneakily scathing. It asks you by the end to think about how you are complicit in perceiving and perpetuating bullshit in our society. Among other things.

Tell us about your role.

I don’t want to give too much away, because there are some wonderful surprises in the play that really take your breath away. But, I play Barbara O’Mallery. She is a pathologically brilliant addict. Among other things…

Did it require any special research or intense preparation?

I did a lot of reading about memoirs and some of the controversies surrounding them. We all watched a lot of Intervention. But really, the process of rehearsing a play is hopefully about creating a new mini universe with a group of interested and interesting people led by a great curator. We have that and then some with this cast and with Colman Domingo as our director. Everyone is very funny and has been so generous with their personal experiences relating to perception, race, addiction, family, fame, lies. That degree of frankness and generosity and capacity to really listen and really hear are reflected in the ensemble work in Barbecue. I’m proud to be a member of this cast.

Talk about your role in Devious Maids.

Playing Evelyn Powell for the last 4 years has been one of the greatest pleasures of my life. Sadly we were just canceled after four successful seasons. I will miss the cast and company of actors and crew who have truly become family. It was a great privilege to work on a role for such a long period of time with smart and funny writers who allowed the character to evolve. And, in Tom Irwin I enjoyed one of the most satisfying work partnerships I think I’ll ever have.

This show is so campy and naughty. Do you think that is why it is so popular?

It is campy and naughty. But it’s also satirical at its heart. We were able to entertain with all the delicious elements of a soap and slip in some jabs at the ironies that are magnified in a place of extremes like Beverly Hills.


Do you have a favorite playwright or play? If so, why this one or this person?

Well, I’m wild about Robert O’Hara at the moment obviously. He is not afraid to take on big uncomfortable ideas in bold theatrical fashion. He doesn’t tie it up in a bow or a neat linear narrative. Barbecue is a play that you’ll want to chew on for a while and discuss over dinner. Maybe some barbecue and Jack Daniels. I like that.

From your standpoint, is comedy harder to play than drama? Explain your answer.

I think if you’re doing it right, there’s a bit of both in everything.

Is there a role that you yearn to play as an actress? If so, which one? May be onstage or in film.

A lot of my favorite playwrights are working in TV right now. There are so many exciting people making really good television. I’m obsessed with Donald Glover’s Atlanta. I’d also love to do a period piece. But, ultimately I’m just happy to continue to work and meet new people and have challenging experiences. That’s what I yearn for.

What do you hope audiences will take away from Barbecue?

Well, I obviously believe in the power of satire to address larger issues. And I believe in the theatre as a place of catharsis where minds can open and people can feel emboldened to relate to one another in new ways. It’s a shared experience that’s a little bit religion and a little bit team sport. Come see us and have a great conversation afterward.

Barbecue plays in the Gil Cates Theater of the Geffen Playhouse until October 16. Visit: www.geffenplayhouse.org 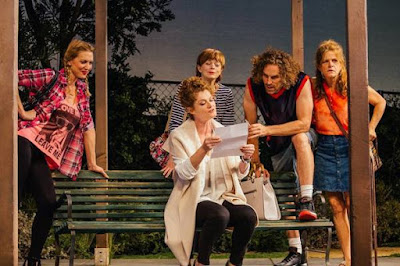 Posted by Don Grigware at 9:13 PM No comments:

The Road Theatre on Magnolia is proud to present "the exclusive Los Angeles engagement" of Edward Albee’s The Play About the Baby, which begins previews Tuesday September 13 and opens Friday, September 16.

Andre Barron will direct The Play About the Baby. Andre’s direction of the critically acclaimed The Other Place at the Road garnered him a BWW Award nomination for Best Director of a Play (Local) in 2015. Barron shares his thoughts with us about Albee's message and the challenges of directing the play. 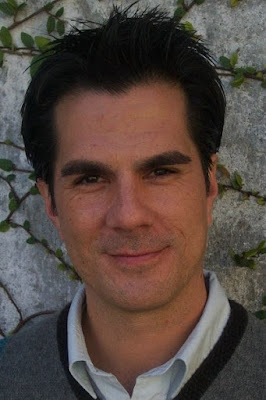 What makes Albee’s play extra special from your perspective?

I am having an extraordinary time with my cast uncovering all the mysteries of Mr. Albee's incredible language. He has built quite a landscape of ideas and content for an audience to feast upon.

Tell us about the play.

The play is very dense… very funny and ultimately heartbreaking. The biggest mysteries of the play are there when the right questions are asked. Once that door has been opened you ask the next set of questions and another door appears. Every scene stands on the shoulder of the last scene. His voice is so distinct and certain. Almost summoning or challenging you to follow him through the trajectory of the story and step up to the plate. The play, I suspect, is somewhat autobiographical in nature. How does one find one's identity in this world? Mr. Albee was adopted as an infant and never knew his birth parents. The story centers around a mysterious older couple who come to "steal the baby" of a younger couple who are in love with a newborn.


Who is in the cast?

I have an amazing cast in Sam Anderson, Allison Blaize, Taylor Gilbert and Philip Orazio. They are all so gifted and very brave actors to tackle this subject matter.

What are your challenges?

I am hoping to be not only fair to every character but to find some redemption along the way. Like all good plays there are no clear villains or heroes. People can make terrible mistakes in life …real wounds that lead to real scars.

What will audiences take away from The Play about the Baby?

Where is the healing and redemption in a psychic wound? Can we go back and right the wrong? How do we author and co-author each other’s stories and why?

The Road on Magnolia is located at 10747 Magnolia Blvd inside the NoHo Senior Arts Colony. There is ample street parking. For performance schedule and tickets, go to:
//roadtheatre.secure.force.com/ticket/#sections_a031600001qMxH4AAK
Posted by Don Grigware at 6:05 AM No comments: