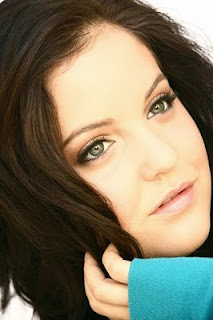 Actress/singer Janet Krupin is not resting on her laurels after winning LA's Next Great Stage Star 2010 at Sterling's Upstairs @ Vitello's in January. Hardly! This is one hard-working career oriented girl! She is currently auditioning in New York and is about to graduate from USC. She talked with me about her career and the road ahead.

Q: Has winning LA's Next Great Stage Star 2010 changed things for you? If so, how?
Yes! Indeed it has, and in all the most wonderful ways. It's been the big daddy domino effect of them all. Just over a week after the competition was over, I was so excited and so surprised to be offered my equity card along with the part of an opera singing poodle. Bark at CLOSBC was like the best, and fastest, masterclass I've ever had the honor to be apart of. I really feel like that's where I learned how to operate at the next level, and I couldn't have asked for a better cast, crew and creative leadership team to learn from. The best example of how the competition changed things for me is that I am currently in NYC! I wouldn't have journeyed east for a few days of big time opportunity without the invigorating show of confidence from everyone involved at Sterling's Upstairs.

Q: Tell me about the shows you've done since West Side Story 2008. What is your favorite role from within these plays (musicals) you've done?

Well since my beloved West Side, I've been honored to jig with the best of 'em in USC's Brigadoon, tell the story of both Alice and Peter in Boomkat Dance Theater's NeverWonderLand, heard it for the boy in Glendale Centre Theatre's Footloose last summer, then straight into the delicious depths of LaChuisa's See What I Wanna See with USC's Musical Theatre Rep, as well as making sure everybody paid the fee to pee in Urinetown with the same wonderful people... (It's almost over, I swear!) Finally, Bark at CLOSBC and understudying the incredible Lesli Margherita in SWIWS at The Blank Theatre.
Favorite? Yikes, I don't know if I have a favorite. I mean I adore performing, but it's really the people with whom you get to work with and form a little family with that makes shows so wonderful to remember... Boomkat, USC's MTR, all my new friends at The Blank... I love all my people!!

Q: The 15th of May is your first full cabaret, correct?

Yessiree. I've been apart of cabarets and showcases and whatnot, but this is a certainly a horse of a different color. I'm so darn stoked to see how everyone responds to what my good friend and accompanist Michael Alfera and I have been crafting together. Should be a great afternoon!

Q: Do you have a theme for the set?

I was inspired by Lady Gaga... Not kidding! The show does not include Gaga's music, but I was fascinated by some of the articles that have come out about her and her own statements and performing, the construction of meaning and art in general. The show is called Rhapsody In New and is composed of songs you know and love, but what we, my own mini Haus of Gaga creative team, including some close friends, fellow artists and my MD (musical director) Michael Alfera, altered the pieces in order to create something original, something exciting, something NEW.

Q: Do you like singing in a supper club as well as acting in a show? Explain the differences with both and the challenges!

I enjoy them both, but I like the full experience of a show better. I think the stakes are always higher in a full show and the build and climax can build to something that just can't be achieved in a club. But, on the other hand, I do enjoy the intimacy of a club setting. Getting to use a hand held mic allows for some vocal play that you don't get to do in a show.

Q: What is your major graduating this year? What are your immediate plans for the future?

I graduate May 14th, almost exactly 24 hrs before the show. My degree is in Cinematic Arts, Critical Studies with a double minor in Musical Theatre and Philosophy. My plans are to keep going on the road I'm on! More performing, more singing, more creating! I am going to fit in a little vacation to Paris with my grandmother in the little vacation space I have later this month.

Q: What are your long range goals as a performer?

I think my dad said it best, "Get your eye on the ball and just keep swinging, kiddo!" I want to be apart of and give as much as I can back to the storytelling community for as long as they'll let me.

Q: Talk a little about film vs. stage and how both fit into your career goals.

That phrase "the storytelling community" is really a great descriptive term... Film and theatre are just slightly different mediums in which meaning and story can be constructed and presented. I'm going to keep working to be infront of and onstage, but also behind the processes for both.

Q: Getting back to your family, it sounds like they are really behind your plans.

I have the MOST supportive and magnificent family and friends. My dad and I spoke about me flying to NYC on an impulse and his last words to me where "Break legs and please bring me some really good deli mustard."
Catch Janet Krupin on the afternoon of Saturday May 15 at 1pm at Sterling's Upstairs @ Vitello's! She is one talented sizzling performer you do not want to miss!
Posted by Don Grigware at 2:08 PM