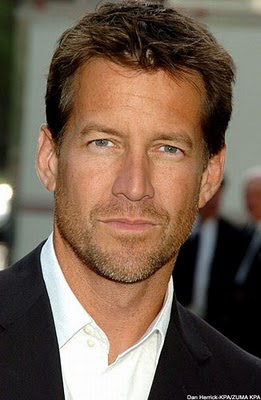 Actor James Denton from Desperate Housewives is immensely popular and every woman's dream man. When I met him at a charity event for SeaGlass Theatre recently, he struck me as a really nice guy, warm, friendly and very easy going. We talked about SeaGlass, their fall project, his music - and of course, Desperate Housewives.

Tell me about the fall production at Sea Glass.

Our Managing Director Paul Stroili was involved in the original production of Of Grapes and Nuts twenty years ago in Chicago. He presented this award-winning comedy, a send up of John Steinbeck, to SeaGlass and they were delighted with it. It's sort of a hybrid of Grapes of Wrath and Of Mice and Men, but lacking the one thing not really evident in Steinbeck's work... a sense of humor. The great thing is, it's a funny play even if you're not familiar with the source material. But if you're familiar with the Steinbeck works, it's truly hilarious.

You're a busy man working a successful TV show and doing theatre as well. Explain how both mediums fit into your life. Why is it important for you as an actor to stay connected to the stage?

Theater is just so much more rewarding. And that's all I knew before moving here. When I became an actor, I never expected to do it in front of a camera. You are in control of the performance in theater - not a dozen producers and an editor. You can be great or really suck on television and it is totally out of your control. But thank God for Housewives. It financially enables me to do some theater. I try to make sure I get on stage every year or so.

Talk a little about the play How Cissy Grew.

It was a lot of fun working with Erin (O'Brien, his wife) again. It's the third play we've been in together, and we had a blast. We only did it because it was such a great role for her, and she was brilliant - I basically did an imitation of about a dozen guys I grew up with in Tennessee.

What kind of role appeals to you most? Why?

I've heard actors say that bad guys are the most fun, but I don't think that's really accurate. The character just has to have some interesting flaws. The two best roles I've had were Mr. Lyle on The Pretender for four years and Judge Ripley on the Bochco show Philly. The former a real creep, and the latter a pretty solid leading man type. It just depends on how well they are written.

You and your wife Erin act together, sing together. How long have you been together as a team and what makes your marriage work so beautifully?

We met in a play at the Court Theatre in 2000 and got together almost immediately. She started singing with Band From TV because she was better than the people we were paying to back us up, and we have a blast doing it. I think we're just a lot alike, and that goes a long way.

What stage role do you yearn to play?

There's really not one that jumps out at me. I always wanted to play Pale in Burn This but got cast as Burton. Wasn't cool enough. Also wish I had gotten a chance to play Brick (Cat on a Hot Tin Roof) or Chance (Sweet Bird of Youth), but those days are over. I got to play Stanley (Streetcar) in Chicago, and that was a workout.

Tell me about your music and growing up in Nashville. Is music equally important in your life?

I started playing guitar when I was 12, but put it down and toyed with the piano through my teens and never got very good at either because of it. I wrote some music for a few plays in Chicago, but basically got away from it for the last 10-15 years. The charity opportunity with BFTV got the guitar back in my hands and I've improved a lot. I was never very good - particularly by Nashville standards. But the band and I have both improved a ton in the last four years.

Who are your acting idols?

There are some actors I will always pay to see. Robert Duval, Robert Downey, Jr. Guys who never, ever phone it in. Even if the film is bad, they will be worth watching. I think Hugh Laurie is the best actor on television. And I thought that before I met him. He is slick - I never see him working.

Who are your singing idols?

I'm a Springsteen guy. 100%. I really like John Mayer - he got up on stage with us one night and was a great guy. He played my guitar - and now I can tell it's bored with me. If it's country, Dwight, Steve Earle, Phil Vassar and Dale Watson. I was lucky enough to be in videos for those last two guys.

What's up with Desperate Housewives? Do you foresee a long run for your character? Why do you think it has been so successful?

It feels like Mike will be there as long as the show is on. They've had too many good opportunities to whack me, and if it hasn't happened yet...
Mike and Susan might be too much a fixture for that. Looks like we'll get two more years for sure - which is outrageously lucky these days.
Posted by Don Grigware at 1:22 PM