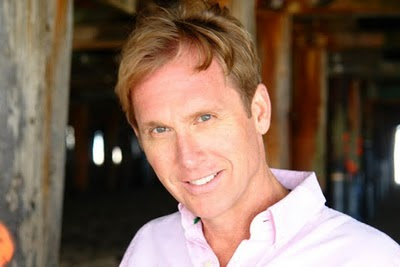 Del Shores' plays are unusual, and simultaneously funny and heartbreaking. Yellow has been extended again at the Coast Playhouse through September. In our chat he talks about the genesis of his plays including Yellow and a bit about the sad demise of the Logo Series Sordid Lives.

To what do you contribute your success as a playwright?

I write stories that I know and thankfully, it seems that my characters strike a chord with the audiences. I can't tell you how many times people tell me that they have an aunt like "Sissy" or their mother is "Latrelle". Lately, with Yellow, it seems that so many people have had the foundation of their family ripped from them by an unexpected life circumstance. I've never seen so many tears in a play.

What do you think audiences most enjoy?

I think they love the blend of comedy and drama. People love to laugh, but they also need to cry. And of course, the characters.

Yellow is advertised as your most dramatic play to date, but I found Southern Baptist Sissies just as dramatic and even shocking. How do you feel about that?

When we went out with that campaign, I wasn't for sure that it was right either. The tragedies of Sissies and in The Trials and Tribulations of a Trailer Trash Housewife.... both are very intense and dramatic. But I believe the blend of comedy that those plays have is throughout, where in Yellow, the comedy is much more uneven. It's in the first act, but sparse in the second act. But, Don, I'm not sure that if we debated this issue, that you wouldn't win.

Do most of the plot elements come from your own real life experiences or are they imagined?

They are a blend of my life, other lives, life observation and my imagination.

Separate and describe, if you will!

Let's take my last four plays. Sordid Lives was conceived because of my coming out to my Southern Baptist family. My imagination went wild and it got a little crazy. "Ty" and "Latrelle" are me and my Mom. I have aunts that I based "Sissy" and "LaVonda" on. Thankfully, I don't have an "Uncle Brother Boy." "Sissies" was me dealing with my upbringing. My Dad was a Southern Baptist preacher and all the "Sissies" were part of me, part of others I knew or know. "Peanut" and "Odette" were characters I created by observing a bar called the "Oasis" (no longer there) in the Valley.
I had a boyfriend who had a sister in an abusive relationship. Her story, then others I researched inspired Trailer Trash Housewife.
Yellow came to me by witnessing the lives of friends. I blended three stories that inspired the play and my imagination then took over. Once I create the characters, they seem to write the plays.

What happened to Sordid Lives the series on LOGO? It was so meticulously written, acted and executed! What's the bottom line?

The bottom line is that I was put in business with the wrong producer by my former agent. I'm trying to stay positive, so as the unions for the actors and myself try and collect the residuals that are owed us (over seven figures), we are moving in other directions. LOGO ordered a second season, the producer choose not to pay us. The series feel apart. Lessons were learned!

What's up next for Del Shores - the actor, playwright and director?

I'm looking to shoot a low budget feature of The Trials and Tribulations of a Trailer Trash Housewife in the fall with the original stage cast. It's coming together quickly. I'm going to continue to perform live my stand up and one man show. I'm playing the Rrazz Room in San Francisco, August 12-15 with some of my Sordid cast -- and I want to write more plays. I waited too long. The plays feed my heart and soul. I will of course pursue television and film, but I'm not going to worry to much about it. I may not have the money I once had, but I'm happy again. It was a rough couple of years with all the mess with the series, but I'm focused now, and Yellow has had so much to do with the healing. I would also like to return to the Sordid franchise in film and/or webisodes. The fan base is huge and I do love those characters and the actors. I will not replace Rue (McClanahan, who recently passed away). There is no other.

I commented in my review that most playwrights should not direct their own works, but that you are one director that can carry it off successfully without a third eye. Do you ever feel the need for that third eye?

And thank you for that. Many have said the same, a few have said I shouldn't direct. But directing is part of my writing process. I've directed all of my new work since 1996 and it seems to still be working.

Comment, if you will, about the film of SBS!

The film of "Sissies" fell apart when a major financial partner pulled out. I still want to make that movie, but this economy has not been helpful.

Anything else bursting to come out?

Let's talk about the kiss, shall we? First of all, thank you for such a glowing review. I love the way you write. The kiss scene in Yellow has become the most talked about scene, and the favorite with audiences and critics of the play. You said you "disagreed" with it. So allow me to explain. I wrote that kiss because there is something beautiful happening in this country with the new generation. "Gay" isn't a horrible thing. Many straight teens are very accepting and best friends with gay teens. I wanted to show in Yellow that change is happening. We have a Southern family that accepts this gay friend of their daughter, completely and unconditionally. Why? Because the father of the family has a gay brother. Putting a face on gay, so many coming out, is making a difference. And it's making a huge difference in teens (remember I have two daughters - 17 and 20). So, with "Dayne" (a straight boy) growing up with the attitude of "I'm cool with it. With you.", I wanted to show this very straight boy gives his friend a gift -- a kiss by someone he likes. "It's not fair you have to wait until you get to New York." So, there you have it.

Intelligently and passionately defended by Del Shores whose controversial new plays are the most anticipated in Los Angeles. Catch Yellow @ the Coast Playhouse through September...and perhaps beyond!