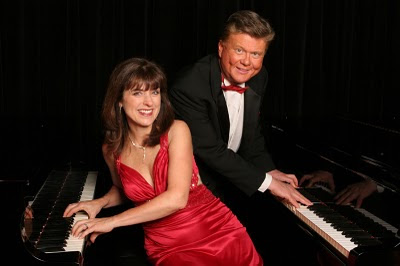 (Johnson with musical partner Wayland Pickard in one of their Legendary Duets collaborations.)

Prolific musician Deborah Johnson has composed the music for an exciting new musical Stiltz! set to open Friday, September 24 at the Actors Forum Theatre in NoHo. On Stiltz!, Johnson also serves as musical director. Her partner Wayland Pickard (in photo above), another virtuoso, is co-directing the musical with Doug Engalla.

Tell me about Stiltz! and what makes it unique as a musical.
DJ: Stiltz! is a modern take on the Rumpelstiltskin tale set in Office #7 on the first floor with a computer nerd, inventor father and evil boss. It is unique as a musical because many of the songs can stand on their own. One of the biggest comments that I get is that people cannot stop singing the songs. There’s lots of singing and dancing in the show.

WP: Let me add, t
What kind of music may we expect? Is it for kids as well as adults? Or is it geared to adults like Sondheim's Into the Woods?
DJ: Paula Miller , who wrote the book, and I researched several fairy tales and found that thankfully Disney would not be producing Rumpelstiltskin in the near future. We defined the main characters and Paula used the outline of the original tale to put together the form of the book. As we worked on each scene, there were themes that developed and I began writing the songs around the characters with some of the song titles that emerged from the themes of each scene. I make up real rough scratch song tracks in my studio, many times singing all the parts just to hear how the song will fit with the dialogue and story. The music is not formulaic in its approach, but uses multiple stylistic elements of rock, pop and even techno. It was very fun to write and I think it’s fun to listen to. Anyone from middle school to adult will enjoy Stiltz! It’s light, easy to understand and very entertaining.
Tell me about Double Grande: Legendary Duets and your participation in that.
DJ: Double Grandé is a vocal/piano duo with Wayland (Pickard). We perform Headliner shows and Corporate entertainment all across the country. What started out at Starbucks with a Double Latté after an ASCAP Musical Theatre workshop and ended up as Double Grandé. Both Wayland and I write musical theatre and decided to join ranks, which has been one of the best decisions I have ever made. He is an ultimate pro and it’s a pleasure working together. I don’t think there’s a musical team out there that works as hard and long at their craft or that has the combined pool of talent represented in this duo. We really do compliment each other. Of course, I’m the pretty one…
Thank you, Deborah, and I am proud to say that we were recent Grammy Award contenders. We present a variety act of music, comedy and impressions. It's "Sarah Brightman meets Victor Borge".
Deborah, what's next for you in the music world?
I have a couple of music tours ahead. I’ve got a solo show in Wickenburg, AZ, then Wayland & I have a tour and a series of shows with Double Grandé, which I’m really looking forward to. I’ll also be working hard on getting another one of my musicals Tsarina ready for it’s world premiere at the Grove Theatre in Upland, CA March 2011.
WP:
DJ: I really appreciate the team that has helped to make Stiltz! happen. Just like it takes a village to raise a family, it definitely takes a town to launch a musical. So I’m glad I’m in a good town!
____________________________________________________________________
Stiltz! The Musical will play Fridays and Saturdays at 8 pm and Sundays at 2 pm at Actors Forum Theatre on 10655 Magnolia Blvd in NoHo. Get tix @
www.theatermania.com
___________________________________________________________________
LEGENDARY DUETS ON TOUR 2010 Southern California Dates
October 21, 7:30 pm - Group Rep in NoHo www.thegrouprep.com
November 6, 7:29 pm - Grove Theatre in Upland www.grovetheatre.com
November 20, 7:30 pm - Norris Center for the Performing Arts in Rolling Hills Estates