The following interview with the great lady, Betty Garrett, who we miss already - passed away on Saturday, Feb 12 - was printed in NoHo LA in the January 18-31, 2005 edition. We did it prior to the opening of Nunsense @ Theatre West. 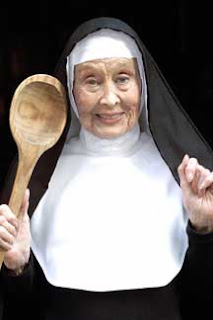 Right after my interview with singer/comic actress Betty Garrett, I had a delightful surprise. I turned on TCM (Turner Classic Movies) and came in on a screening of the 1948 film Big City with Margaret O'Brien. Lo and behold playing nightclub chanteuse Shushu appeared the very beautiful Garrett singing up a storm with "OK'l Baby Dok'l" by James Miller. Garrett, beloved from film, TV (All in the Family and Laverne & Shirley), and Broadway (most recently in a revival of Stephen Sondheim's Follies) teaches a weekly musical comedy workshop at Theatre West and is about to sing and kick up her heels live onstage in Nunsense, opening there January 20. She finally has a star on the Hollywood Walk of Fame and is a recent recipient of the Cinecon Award, the Professional Dancers Society Award and the Ovation Award for Lifetime Achievement.


Any special reason for mounting Nunsense at this time?

Well actually, Lee Meriwether kind of put it together. She was out on the road in it for ten months and became friendly with the writer/director Dan Goggin. Before she went, she enlisted a group of actors at Theatre West to help her learn the show and workshop it. On the road, she expressed the wish to Dan of doing the show at Theatre West so that all the people that worked so hard could perform it. His response was "Why not?" He gave her the rights to it and not only that, he generously agreed to come here to direct.
Lee and I have been friends for over 40 years now, and she said "I wish we could find a part for Betty", because all the other parts were assigned. He said, "I'll write her a part." So he wrote in another character (before now the cook was only mentioned), and a song. I'm Sister Julia Child of God. I'm in the tap dancing number and I also get to read from my cookbook that I've written in order to raise funds. It's just outrageous. (She laughs heartily.)

Do you prefer musical comedy to drama?

I love any kind of theatre, as long as it's good. But, somehow when I started out, I was doing things where I had to learn to sing, and musical comedy seemed to be where I was the most successful. As a matter of fact, my next project is going to be working on a revue of all the songs that I've written over the years.* I discovered in my trunk about 50 different popular songs. I've been doling the songs out to people in my musical comedy workshop to try them out and see how they work.

What advice do you give young actors?


Get yourself hooked up with some group where you can work all the time, because it's a waste of time to sit around waiting for your agent to call you.
_ _ _ _ _ _ _ _ _ _
* This became Betty Garrett Closet Songwriter, performed at Theatre West in November, 2007.


Betty Garrett worked hard and always delivered. What a gal; what a performer! Your passion for the theatre should never die, even in moments that are, as we say, less than favorable to you. Garrett is certainly living proof, as she worked at Theatre West and attended theatre around town and the country right up until shortly before her death this year. Young actors can learn a lot from her tireless dedication and lifelong service to the arts. She will be sorely missed!
Godspeed!
Posted by Don Grigware at 11:16 AM