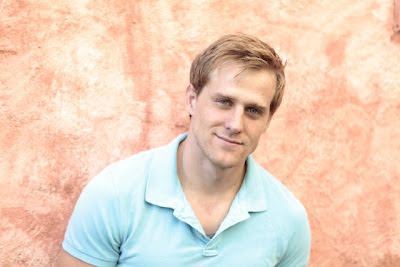 Actor Burt Grinstead may have a short theatrical resume at this stage, but he has been working consistently over the past couple of years essaying plays in New York, Pennsylvania and Massachusetts. Since coming back to LA last summer, he has been in the highly successful Esther's Moustache at Sidewalk Studio Theatre this past fall and is currently treading the boards once more in the all new critically acclaimed production of Deathtrap at the Gay and Lesbian Center in Hollywood. In our chat he discusses Deathtrap and the other roles he's played, his focus as an actor, and those actors who have had the most influence on him.

Tell me where you're from and how the whole acting thing got started.


I'm was born in the Worchester area of Massachusetts, and then I grew up here in Thousand Oaks. From 10-16 in school I started doing plays, and then it started branching out into that whole entertainment world; I started doing commercials and going out on auditions for movies, soap operas, and then I hit puberty and it flatlined. I moved back east to Massachusetts again, and fell out of the acting world in my high school years and into the whole sports thing.

Was there one play that you did that made you say, "Yes, this is for me"?


I studied with Stu Levin who did repertory theatre in Agoura Hills, and from that time, the one role that I wish I could do over is Hal in Picnic. The other play is Hello Out There by William Saroyan. When I did those two plays, I was too young to develop any real sense of character, and Hal is a very modern man. He's very specific to my type and I'd love to play him again. Picnic is an Inge play and it's got that teen, soap opera kind of feel to it, the sex and the dynamic character thing, so it's very in all the time.

Didn't you study at AADA (American Academy of Dramatic Arts) in New York?


Yes. I did the two year program and graduated from there. I decided against auditioning for their company. I just went out into the world of New York and tried to book as much theatre as I could.

What did you end up doing?
It went really well. Coming right out I did A Midsummer Night's Dream with a great little company called the Pulse Ensemble Theatre, headed by Alexa Kelly. She had strong faith in me and always kept bringing me back. I also did a great murder thriller called Ladies in Retirement at the Mint Theatre. Then in Pennsylvania I did Julius Caesar for a Shakespeare company that tours high schools. Then in Boston at the Speak Easy Stage I did Neil LaBute's Reasons to Be Pretty, in which I played the ultimate jerk. All the reviews said Burt Grinstead is the biggest douche bag. He plays the most chauvinistic male. It was definitely an intense experience to play that. My testicles got stomped on at the end of the play; that was the defining climax. Every time the other character would do that, he got a standing ovation. I played such a jerk.

Tell me about Esther's Moustache that you did out here last fall.
It was incredible. Laurel Ollstein is the writer/director of it. It was a fun experience, a very comedic, farcical kind of play but with real family issues. I played a German messenger that would deliver cartoons to the magazine...it's a complex story, and I became an Orthodox Jew by the end of it because I was so in love with the main character. I got a chance to do a very intense German accent, so it was great fun.

How did Deathtrap come about?
I auditioned for Ken (Sawyer) and Jon Imparato. It hasn't been produced in LA for years, and Jon really wanted this to be successful...and Brian (Foyster) has been involved from square one too. It is so easy to act with him on stage; it's one of the easiest things I've ever done.

There's not one slouch in that cast and what a great set by Joel Daavid!


I was so thrilled by everything about this play, and the fact that we got to work on the set from day one! It had been designed, built and everything was underway when we came in. It's been a fantastic rehearsal process, and Ken (Sawyer) is an incredible director. He just knows how to tell you to do things without you realizing that he's telling you.

Was the nudity a new experience for you onstage?
Yes and no. Every play I've done, I've definitely had to be shirtless. I guess they use what they have, but this was the first time I've had to be fully nude.

Does it bother you as it does some actors?

Good and that shows in your performance!  Who are your acting idols?


I have quite a few that I look up to. Christopher Reeve is an incredible actor. I saw the movie of Deathtrap when I was in high school, and he's the reason I wanted to do this project. I haven't watch it recently because I don't want to be influenced by it. But Christopher Reeve is an idol human being as well as an idol talent. I really, really love Robert Redford. I've been compared to him looks wise, but I don't think I'm anywhere close to him talent wise. He is just one of the more natural artists. The way he brings a role to the screen. I did a scene from Barefoot in the Park, and I had seen that movie a hundred times, just 'cause I love him so much, but I could not do it, I couldn't do it because it's a Neil Simon, quick banter...it's so hard to do. To keep up that energy and to keep up that pace as well as to hit the lines while keeping it serious and real; he could do it...Jeramiah Johnson is one of the best performances I've ever seen onscreen, and he speaks maybe three times in that movie. In modern times, maybe not as a human being, but I have a lot of respect for Jude Law as an actor. He picks and chooses his career very specifically so that he gets to do these really kind of cool roles. I saw him do Hamlet on Broadway and he was incredible.

Anything you want to add about Deathtrap or anything else?

Just to put in good words for the rest of the cast. They're all incredible - and the director - and the design team.

Burt Grinstead is no slouch. He knows who he is, what he's got and how to use it. I predict great things for him. Tall and handsome - and he can act too! - he's the perfect soap type: producers, take note! I wish him the best of everything! 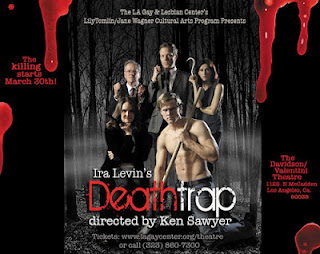 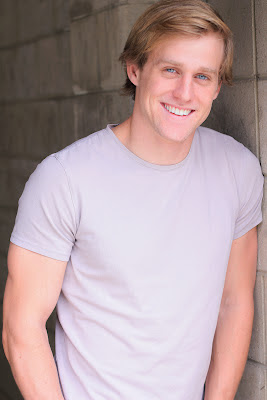