Comic actor/singer Roger Bart won a Tony for playing Snoopy in You're a Good Man, Charlie Brown and a SAG Award for portraying George Williams on TV's Desperate Housewives. His versatility has also led to voice over work singing as Hercules in the Disney film of the same name. Bart will reprise his Tony nominated role of Carmen Ghia in The Producers at the Hollywood Bowl July 27-29. In our chat he talks about The Producers, Mel Brooks roles and other theatrical tidbits. 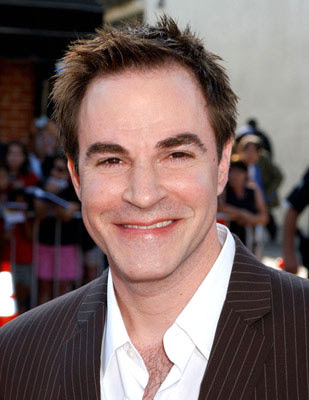 How many times have you played Carmen in The Producers?
Only twice. The first year and a half of the run on Broadway and then I went away and did a comedy series here in LA, and I came back seven months later and did it again for three months with Matthew (Broderick) and Nathan (Lane). when they came back to the show. And of course the movie, so three!
How do you approach a role that you've played before; how do you keep it fresh?
Of course, it's at the Bowl this time and the Bowl is huge. Honestly, Don, it may be the only time in my life doing this show that somebody doesn't accuse me of being broad. I could have an esoteric conversation with you about technique which is just to talk, listen and respond, which in some ways is analogous to playing jazz with other great musicians. In The Producers, the material is so fun and so delightful to do...the relationship between Gary Beach and me...it's no fun unless I'm doing it with Gary Beach. 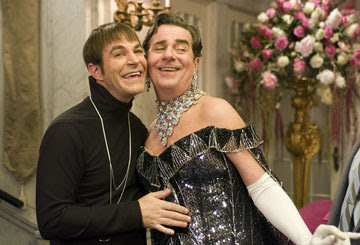 We created a relationship that was so multi-dimensional that there was always something to discover there about their great happy partnership. Like jazz musicians in this kind of show, there's a myriad of ways to play the tune, and if those you're playing with, play it well, it is an exchange, an experience that is unique every night. In the perfect world of Mel Brooks we make Max and Leo as uncomfortable as possible with our liberal behavior...it's really fun. 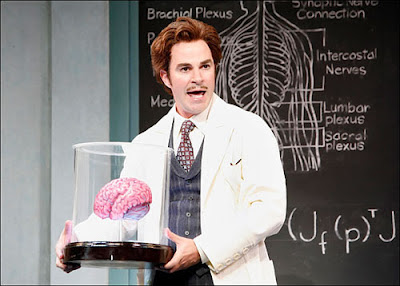 What about Young Frankenstein? Of course, again Mel Brooks! Apart from the size of the roles you're playing in each, as you have the lead as Victor Frankenstein and a supporting one in this, how would you compare the two?
Young Frankenstein was really a sendup of the genre of horror movies. The Producers is really about putting on a Broadway musical. By virtue of that, it works better as a musical than maybe Young Frankenstein did.
But that also worked great as a musical. My responsibility particularly...I did Leo Bloom for about two years altogether...the great thing about Carmen Ghia is he can be very flashy and silly and people get excited... but, I'm not onstage very much. I go out there and be a little eccentric or a lot eccentric, and I'm not onstage long enough where I have to sing a song explaining why I am eccentric. There are advantages to having a fun small part in a show. It's my job to be the driver, surrounded by all these wonderful character people, to be moving and buoyant and help everybody else so that they can come on and do what Carmen Ghia does.
Talk a little about director Susan Stroman.
She's extraordinary to work with. This is my third or fourth endeavor with her. She's a good friend and an extraordinary talent both as a choreographer and a director. We've always had a great collaboration as she has with most everyone she works with. The people that she hires around her are all great, and I don't think there's anyone I love working with more than Susan.
You seem to have a wonderfully unique comedy style. Do you emulate anyone in particular? Where does it come from? 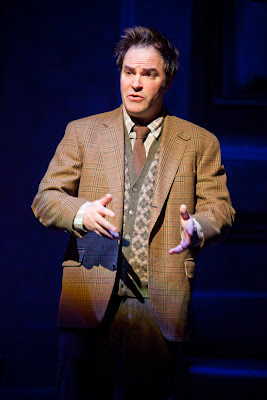 Gary Beach would probably answer this the same way. I'm a huge fan of Warner Brothers cartoons. I would spend many hours alone after school watching Daffy Duck. I think Daffy Duck is one of the great comedic villains. I also have a great uncle who was a comedian in the vaudeville circuit, who worked with George Burns and Gracie Allen. With that DNA running through my veins...I come from ...my parents are MIT scientists...they're very bright, I don't know what happened to me. It's your sense of mathematics, music, the science of designing a role so that you are surprised onstage, and my influences that include watching the Marx Brothers and the math that went into designing that slapstick comedy, and all the training with the commitment to being truthful, can hopefully make for fun work.
What is your favorite role to date?
I love Carmen Ghia. I loved doing Leo Bloom, which was a fantastic part. I've also enjoyed having the opportunity to be fun and then suddenly make everyone cry. Like in Falsettos, I loved doing years and years ago; I loved doing The Who's Tommy. A great part in like a music video almost. I also loved doing How to Succeed in Business, the Charles Nelson Reilly part. They're deliciously comedic and  conniving, and those classic shows like Business ares structured so perfectly, and the music, which I love, is swing and jazz...those roles I think are my favorites.
Any role that you really want to play?
Not off the top of my head. I think Danny Kaye would be an interesting person for me to try to work on...you don't know those until they come along. Hopefully they'll come along as I get older.
I'm sure of it! How many weeks of rehearsal do you have for The Producers?
I think about two. I could get back and do this in three days, provided she (Susan Stroman) doesn't give me too many hard dance steps. It's in my blood, this one. (he laughs)
Roger Bart is bound to be fantastic in The Producers at the Hollywood Bowl, Friday, July 27 at 8pm, Saturday July 28 at 8 pm and Sunday July 29 at 7: 30 pm Note the performances no longer start at 8: 30 pm!
For more info and tix:
http://www.hollywoodbowl.com/tickets/producers-new-mel-brooks-musical/2012-07-28 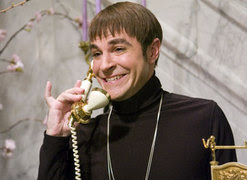