2015 Interview with Producers of Carrie The Musical

Explain briefly but specifically the changes in the staging of Carrie since the last New York production three years ago. I understand the set is different. How? Does it bring the audience into the action more?

The Off Broadway production was the impetus for a renewal of interest in the show. Although it closed early, that chamber production, which was performed on a standard proscenium stage, proved that the brand still had widespread audience appeal.

Following that lead, we are producing an audience-immersive, environmental production of Carrie in which we will be bringing the audience into the center of the action. The audience will be seated, some of them in movable bleachers, in the gymnasium of Ewan High School and the story of Carrie’s days in school will happen all around them, with many surprises and terrifying moments. At every performance, some members of the audience will be invited to attend the prom and who knows what might happen there?

Is the music intact or has any of that been changed as well? What about the book?

The music is essentially the same great score that many people love so much, although there will definitely be additional music in this production. The authors are working closely with us and are making small changes to the score, book and lyrics. We are excited because we are attempting to develop a new approach to the show which will make it more accessible to today’s audiences. One of the most beloved thrillers of all time, Carrie spins a classic tale of bloodsport and revenge. Our production is not a replacement for any other version. It is a reimagining, a telling of a classic tale from a new point of view.

Has bringing Carrie into contemporary light with all of the psychological problems of teens more apparent made the story more accessible to them and to their parents?

The psychological problems of teens are the same now as they ever were. It is the media and technological advancement that has changed. Perhaps it is easier now to reach our younger audiences but the world of high school never changes. There are always the jocks. There are always the cheerleaders, the nerds, the stoners, the bullies and the bullied. No matter when we went to high school we all have visceral memories of that time. We are inviting our audiences to enter into their own good or bad memories and to go back to high school with us. Everyone remembers. Do we ever forget those days? Do we ever escape them? Do they still haunt our dreams?

What is the plan for this show? Is it hopeful that a Broadway run is in the offing?

This is a developmental production with an extraordinary director, Brady Schwind, who has conceived this exciting new road we travel, and a fantastic creative team who are working with all their powers to astound our audiences and to scare the pants off them. If all goes well at LaMirada, we are planning future productions for cities around the world, perhaps kicking off with Las Vegas, New Orleans and Toronto. Although we are active Broadway producers, we have no sights set on Broadway at the moment.

Anything else you care to add?
We invite you and your readers to join us in conversation #experience carrie and at the theatre for this very special look at a most remarkable musical. Carrie lives in all of us. We are all Carrie and we delight in bringing terror to the City of Angels.


In addition to Carrie the Musical, these prolific men are about to open the first major New York City revival of the Tony Award-winning The 39 Steps. They have brought the entire original creative team back together, including Tony Award-nominated director, Maria Aitken, and the show is presently in rehearsal re-creating the acclaimed Broadway and London production. The production is scheduled to begin performances on April 1 and open on April 13, 2015. In addition, they also have a major play revival in development for the fall and a new dance musical Pirates! Their critically acclaimed production of the musical On The Town continues to delight audiences at the Lyric Theatre on Broadway.
Remember Carrie will perform in La Mirada at La Mirada Theatre for the Performing Arts, 14900 La Mirada Blvd., La Mirada, March 12 - April 5!
http://www.lamiradatheatre.com/ 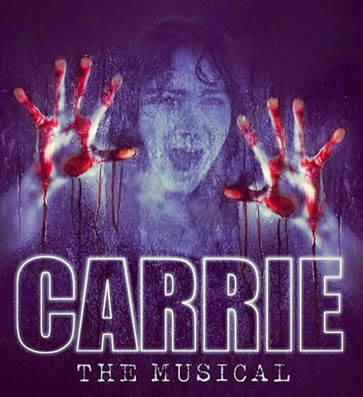