Award-winning veteran director Jules Aaron has been putting his directorial stamp on musicals and plays for several decades.  Mr. Aaron takes time out of his busy schedule to talk with us about his current project, the west coast premiere of The Group Rep’s production of THAT LOVIN’ FEELIN’ running December 11 through January 24, 2016 at the Lonny Chapman Theatre in North Hollywood, which already has some SOLD OUT performance dates.  He also gives us a glimpse into his background and the encouragement he received along the way.

When did you first get interested in theatre as a performer and later as a director?

I performed since I was six years old through graduate school.  I made two close friends — Bernadette Peters, who I went out on auditions with when I was young; and Lily Tomlin in undergraduate school at Wayne State University. I became close to Lily and her brother. She and I did reviews together.
When I saw Olivier do Beckett at 20, I knew I was not going to be a real actor. I became interested in directing during my PHD program at NYU, and my former wife and I had a theatre in a loft in the West Village. My first show, THE MAIDS, was fortunately well received by The Village Voice and given a good review.

What was your first directing experience and what did you learn from it?

Since as an actor I had no connection with my inner feelings, I learned to find that inner life in the actors I worked with. I was always good at orchestration and visuals, but as they say - casting is 2/3 of directing, and I’ve learned from wonderful actors.

Did you have a mentor along the way?

Richard Schechner, the king of environmental theatre, was my mentor and Joe Papp and his wife Gail Merrifield at The Public Theatre in New York also took me under their wing and I learned a lot from them.

What was it about this particular musical/play that drew you to it, wanting to direct it?

Of course I love the music of the Righteous Brothers, I grew up with it.  And it’s a great story told to by Older Bill Medley to a college reporter that looks at the real turmoil and love in the story underneath the sanitized legend.

Tell us a bit about the play

We get to see the funny ups and downs of the younger brothers in the 1960s with their wives and agents and producers — especially the notorious Phil Spector; but most importantly there are these well-known R&B songs that are belted out by the brothers with a four-piece band with three hot back-up singers/dancers.

Besides singing the music, what do you want the audience to take away from having seen this musical?

I think the take away is the real story of how love and respect can transcend two very distinct personalities and create a legendary team.

You’re very busy with multiple projects both in Los Angeles and New York.  What’s up next for you?

We are working on a Sammy Davis musical for Broadway, my annual project at the American Academy of Dramatic Arts (AADA) and A Shred of Evidence which will open at Theatre 40 March 2016. 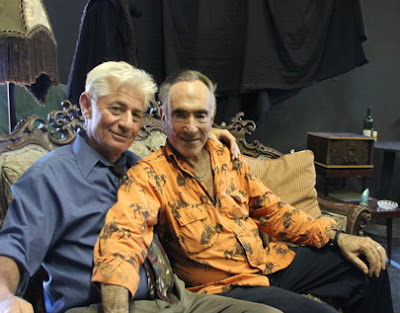