Director Doug Engalla joined the Group Rep in 1997, and also began his association with 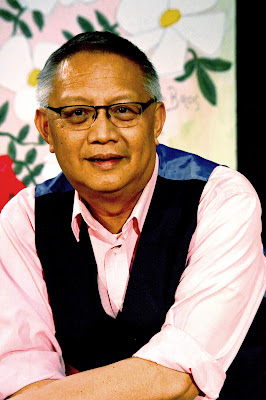 Playwright Phil Olson that same year. Since then, Doug co-produced Olson's A Nice Family Gathering in 2000, and has been involved in most of the Don't Hug Me World Premiere productions, including directing three of its five world premieres, A Don't Hug Me County Fair; Don't Hug Me, I'm Pregnant; and Don't Hug Me, We're Married. This year, he directed the Group Rep's second revival of A Nice Family Gathering, with an African-American cast. During the day, Doug works for Walt Disney Animation Studios as a custodian of the Studio's animation art legacy, and as an observer of Disney Animation's unique process of storytelling.

What was your first directing job and what did you learn from that experience?

My first directing job was for the Fremont Community Theatre in Northern California, on a revival of Neil Simon’s first play, Come Blow Your Horn.  It was during the late 1970s, and I thought it would be more relevant if I updated some aspects of Simon’s 1961 script to fit the culture and mores of the late 70s. But, the lesson I took from that experience, was to always respect the text and to trust that the audience will take any relevance that they saw fit.  I never did that again, unless I was approached to try something nontraditional.

You’ve worked with playwright Phil Olson on several of his plays – mostly world premieres.  Do you also contribute in the creative process of the development of the play, and if so – in what way?

I’ve been invited to attend a number of table reads, especially for those in the Don’t Hug Me series. We sometimes have a “day after” chat, to evaluate the feedback he’s received. During the rehearsal process, Phil will phone me up before a rehearsal and try out some rewrites, to see how I respond to them; and he is present at nearly every rehearsal, which is a great way to make sure we’re doing justice to what he’s written, as well as to his intent of the story and the characters.

Well, I was always taken with the rhythm of Phil’s writing, and I have an affinity for his comedic sensibilities. I think we have a lot of that in common, though it’s not uncommon for one of us to take the other’s idea to the next level, especially if it can make the moment funnier. When it comes to putting on one of his plays, we’re literally co-directors, and in that way, almost like traveling companions on this journey. Phil had referred to me as his honorary Minnesota brother, and I take that as quite a compliment.

For many years, you’ve worked at Walt Disney Studios.  What is your current job there, and what does it entail?

I’m coming up on celebrating 27 years with the Walt Disney Studios, and specifically, with Walt Disney Animation. I do have the distinct honor of helping to archive and to preserve the production art that goes into making the Studio’s theatrical animated features and shorts, for the purposes of Studio reference as well as for publications and exhibitions. It’s a pretty unusual job to be having at all, and for so long, at that; yet working around the filmmakers at the Animation Studio has taught me a great deal about telling a story clearly and without clutter. I would say that their process informs me on how I approach a directing project, based on the clean and relatively simple through line of their stories.

A Nice Family Christmas is described as a family holiday comedy, with some drama.  What do you want the audience to take away from the play?

In addition to being entertained, I'd like the audience to feel that we all have a family to which we belong, whether related or not, but who are like family in our hearts.  And, after the show, I would want the audience to go home to their loved ones, give them a hug, and tell them how much they’re loved and appreciated- - before it’s too late to tell them.

Is there anything else you want us to know about you, or about the play?

This play came along at an interesting time for me personally, as my Mom celebrated a milestone birthday this year. Though there are differences culturally – my family is of Filipino descent - my own Mom shares something in common with the character ‘Mom,’ both of whom have faced their share of challenges, and who ultimately want family to be happy together. When I recently asked my Mom if there was anything she wanted our family to remember, she simply said, “Just be good to each other, take care of each other, and love each other, always.”

What’s up next for you?


Over at Disney Animation, I’m pretty thrilled about our next feature film, “Moana;” which opens Thanksgiving weekend. As for a next theatre project, I’m hoping to work on a women’s ensemble play, as well as develop a possible revival of one of Phil Olson’s past published plays for the Group Rep, although nothing is set yet.

For info about A Nice Family Christmas, visit:
www.thegrouprep.com
Posted by Don Grigware at 5:28 PM