2019 Del Shores Interview re This Side of Crazy

Actor/playwright Del Shores certainly needs no introduction. His plays Southern Baptist Sissies, Sordid Lives and The Trials and Tribulations of a Trailer Trash Housewife have been made into either films or TV series. Shores is about to open his latest play This Side of Crazy at the Zephyr Theatre on January 31. In our conversation he tells our readers about the play in detail. Those who like 'crazy' should not miss this one!

Tell our readers about the story behind This Side of Crazy.

DS: This play has been brewing for years. It all started with my obsession with gospel music, like the song  "Son of a Preacher Man". I sometimes go down a youtube rabbit hole and listen to the music I grew up with, mostly Southern gospel. I became obsessed with Dottie Rambo, who wrote over 2000 gospel songs. Then a crazy thing happened — Dottie Rambo contacted m (around 2005) on MySpace no less and told me she was a fan of Sordid Lives. She sent me a package of all her CDs and even a Dottie Rambo doll. A few months later, we were on tour with the play Sordid Lives and we landed in Nashville, where she lived. I invited her to come see the play where I got to meet her. Then tragically, just a few months later, Dottie was killed when her tour bus crashed. I became even more obsessed with her. And the more I watched her, the more I realized that as she gave God the glory, like many performers, she was also pretty narcissistic. Praising herself while praising Jesus! So, I thought ‘Oh, I could heighten that a little bit’, and I found my character “Ditty Blaylock”.
In another YouTube rabbit hole, I saw these three little girls called The Peasall Sisters singing perfect gospel three-part harmony. These little pastor’s daughters went on to win a Grammy award for doing the voices for George Clooney’s daughters in "O Brother, Where Art Thou?".

As I do so often when I write, I started playing the ‘What if’ game. What if DIttie Blaylock was the mother of three girls, little superstars for Jesus. What happened to them when they grew up?’ I then found Rachel, Bethany and Rachel, and as always, my characters started writing their story.

How is it similar to Sordid Lives?

DS: I guess my humor will always peak through. This was/ is darker, with much more drama, more the blend of tones of my last three (Southern Baptist Sissies, The Trials and Tribulations of a Trailer Trash Housewife and Yellow.) But the themes of family, forgiveness and secrets are certainly similar to Sordid Lives. It’s not as broad. Less camp, although some would think “Ditty" just may rival “Brother Boy."

These stories come from your past. How much is real and how much is fiction?

DS: This one really is all fiction. Oh sure, there are people I’ve met who inspired characters and characteristics, but I really did create the Blaylocks. I guess if anybody is a little bit me, it would be that wild child “Bethany".

You create wonderful female characters. Explain how females dominated your life growing up.

DS: Oh they were all around me. Starting with my mother, who was a force (some of “Ditty” is certainly my Mom.) I was fascinated by my aunts, the women in church and the backsliding relatives who wore lots of make up and had big hair and had very loud voices, with strong opinions. So, yes, I gravitate to tell the stories of woman of a certain age because frankly, I love them.

What is the theme or message in this play?

DS: Family. Forgiveness. And not just that we always need to forgive or are capable — but can we when the crime is so big; depression because of circumstances; sisters/siblings. Like I said, some dark themes in this, but I think many can relate to the stains that so many families have.

What would you like audiences to take away after seeing it?

DS: I want them to first and foremost enjoy an evening or a matinee of theatre. Laugh some, forget that outside world for a couple of hours, maybe think and shed a tear or two. A lot of people will also probably realize that their lives are not all that bad after visiting the Blaylocks.

Tell us about the cast and the chemistry between its members..

DS: It is a ridiculously talented cast. They all started as friends and now have become family. They truly love each other. The play is so intense that we always start by trading hugs. I adore each and every one of them and they are all repeats, having been in other plays, films or TV of mine.

Anything you wish to add?

DS: Just that it’s amazing to be back doing theatre in LA. LA is the city that embraced my work as a playwright and I am so very grateful. And, it certainly takes a village. I love my “Crazy” theatre family. The designers, the cast, crew — and my amazing producing partners Emerson Collins and Louise H. Beard. 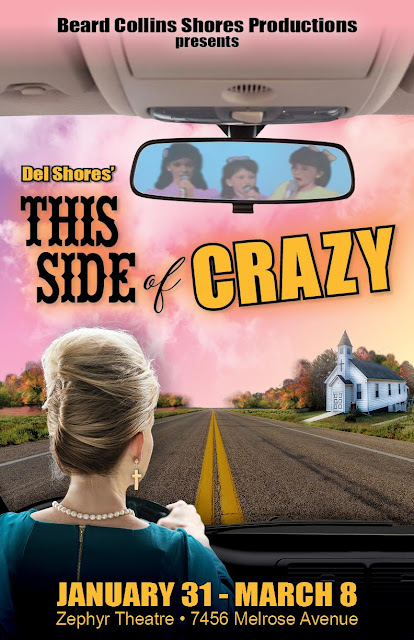