Carey Crim's west coast premiere Never Not Once plays at the Rubicon Theatre in Ventura February 5 through 23 for a three week engagement only. Award winning British director Katharine Farmer will helm the production. In our conversation she talks about the play, her cast and just how enriching it is to work at the Rubicon. 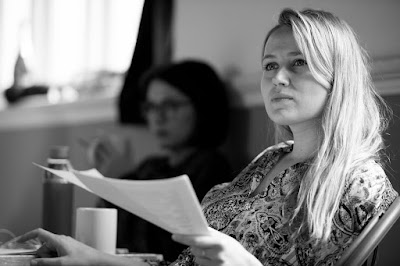 Discuss the complexities of Never Not Once and your challenges as the director.

KF: Never Not Once is as complicated as you want it to be. It can simply be watched as a family drama, or it can trigger a conversation that is longer than the play itself about identity and whether we are more than the simple sum of the choices that we, and others, make. I hope that the play will give our audiences the option to think, and if we have all done our job correctly, audiences will feel compelled to care.

The central challenge to directing and staging the play has been to capture and convey the haunting humanity that definitely exists in the plot and its characters, but lives just as much between the words as it does within them.

What is the message of the play? How does it stand apart from other dramas about dysfunctional families?

KF: We are living in an era of self, but it is not obvious that this is making us any happier. Likewise, science is evermore confident that it is providing us with answers, but is it making us any smarter about which questions really matter?

The message of Never Not Once is that while trying to understand one’s self is the most natural thing in the world, a focus on “I” should not crowd out an understanding of “us”. This play certainly has it’s fair share of dysfunctionality but the concept of family is less of the problem and more of a solution.

Tell us about your cast and their dynamics.

KF: For everyone in the cast, this is their Rubicon debut!

Sydney Berk is playing Eleanor, the college student who wants to find her father. Sydney trained at LAMDA in the UK and has worked extensively with A Noise Within in LA. Her two mothers are played by Diahnna Nicole Baxter and Melanic Cruz. Diahnna co-created, co-wrote and starred in “SATACRACY 88,” the first web series to win an Emmy Award, and was nominated again the next year. Melanie had a recurring role in HBO’s Big Love and recently was seen on stage as Sara in Lucky Me at Theatre West in Nebraska. Our other two cast members are Issac Cruz, who was recently involved with the multi-theatre homeless support production of Homeward LA for the second consecutive year, and Michael Polak who’s theatre credits include The Illusion at North Coast Repertory Theatre and Doubt at International City Theatre.

Working with this fantastic cast has been a pleasure. They have always approached rehearsals with a focus, passion and openness that really serves the play.

Two moms and a daughter searching for her father. Is it a lesbian couple or does that bring about a spoiler alert?

KF: A lesbian couple are at the centre of the play and yet the play is not about lesbianism. Allison and Nadine have created a truly loving home, thereby ticking the “nurture” box. Their daughter Eleanor feels the need to find her father to fully understand her genetic heritage, in order to tick the “nature” box. This need would be every bit as essential if her mother was in a heterosexual relationship. The lesbian relationship brings it greater clarity, intensity and poignancy. Separately I think that it will constitute progress for the LGBTQIA+ community when characters in drama are from that community without the plots of those dramas implying that their sexual orientation is all that defines them.

Talk about the other plays you have directed at the Rubicon. Do you have a favorite?

KF: Asking me what my favourite show is is like asking me to pick my favourite child: I have loved them all. I will always remember Last Train to Nibroc as my first professional directing experience. I will always be proud of South Pacific for the courage it took to put a twist on one of the great classics of musical theatre. But to answer your question, Gulf View Drive was my favourite, for its sense of closure for the both the characters and the audience who’d followed May and Raleigh’s journey for three years.

You have won many awards. How does that make you feel about working at the Rubicon?

KF: Karyl Lynn Burns and James O’Neil are the best mentors that a young director could hope for and the Rubicon is so much more than just a venue. From the “Friends of Rubicon” to the staff and volunteers, Karyl Lynn and Jim have created a loving, caring and support structure for creatives of all ages and in my case, all nationalities. Rubicon is a shining example of excellence in regional theatre on a global scale. When it comes to awards, they are a much appreciated blessing that I would rather not dwell too much upon. My focus and priority is that my next audience will enjoy my next show.

Back to Never Not Once. Does the play come to the Rubicon in tact or have there been changes since it premiered at Jeff Daniels' theatre?

KF: I first read the play in 2016 and loved it since inception. We have made a few small changes to the script since its production at the Purple Rose Theatre, but it’s very much been a case of evolution not revolution. I have always been in awe of Carey Crim’s gift for natural dialogue and compared to other pieces of new writing that I have worked on, much fewer iterations have been required.