The Road Theatre Co is proud to present the premiere of Nowhere on the Border by Carlos Lacámara and directed by Stewart J. Zully. The play concerns itself with the question Why do people cross borders? Two working class men, an Anglo on border watch and a Mexican, face off in the desert. What is discovered is that border crossings are both physical and emotional. The play opened January 17 at the Road on Magnolia and will play through March 8. Each week we will spotlight a member of the cast or creative team. This week the light shines on Jonathan Nichols. 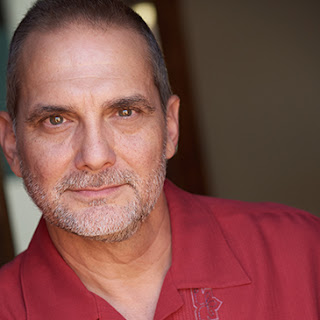 What character do you play? How does he serve the play?

I play Roberto Castillo, and I am the Mexican father looking for his daughter in the Sonoran desert between Mexico and Arizona, the Cabeza Prieta region, which is between Mexicali and Nogales, Mexico, and West of Tucson.

Ho do I serve the play? Well, Roberto is the catalyst for the “journeys” both his and his daughter's. That is the play. He insults his daughter and so she just says “enough, I am going after my husband, that you hate” He is not supportive of the marriage and then he tries to find her when she doesn’t arrive. Roberto is also in the “present time” of the play, along with Gary. While his daughter’s journey has happened. Of course, the audience doesn’t know that at the beginning of the play.

How does the play challenge you as an actor?

It breaks my heart every night. I am an immigrant myself, from Cuba, and I am a fortunate immigrant who migrated at a different time and space. The journey that Latinos make is a deadly one, every day this happens and no one leaves their homes and the place of their birth, unless driven by desperate measures, as the characters of this play do.

What do you feel is the meaning of the play? Its theme or message?

It’s a journey of love. A heart journey that, ultimately, is more unifying than the skin journey. We see with our eyes and we categorize and judge based on color, ethnicity and that is understandable and….you fill in the blank. We all have our prejudices. But a journey for love, vows, promises, dreams, aspiration, wanting a better life, missing your loved ones, that is universal. You don’t need to cross borders, that happens every day in every city and state, here and everywhere in the world.

One, I want them to be moved by it, to understand that the story is universal. Two, to understand the terrible and dangerous plight of an immigrant crossing the border and what they experience every day. It’s there. Carlos has done the research and it’s in the play. I think I said in rehearsals, the sun is a character in the play, probably the most important one. I would love to make the theatre the temp of the desert, so it’s a tactile experience. Heat their seats, that’s it, how we do in cars. That part of the desert is one of the hottest and driest in the US, rivaled only by the Mohave Desert. Summer highs reach 120 with surface temperatures at 180. Can you imagine? But, also that it’s a love story as well. Filial love, daughter and father, father and son, husbands and wives, everyone just trying to protect who and what they love. The beauty is that you can change the colors of the skin and put in two different borders and the play would still work. All you have to do is adjust it to that terrain, cause the terrain is also a character. The terrain, the stars and brother sun and sister moon are also characters.

Talk briefly about your director and cast mates.

Listen, they have been steadfast and have all jumped in. The characters that have the journey have had to do research on what happens as your body gets beaten day after day in the desert, and they have had to vocally and physically research and portray that. Not an easy thing let me tell you. I have it much easier. And, because we are double cast, and we rehearsed thru the end of the year holiday, we jump in and out, playing with different actors from one day to the next. Not easy to do. Same words get said, but in different rhythm, and it takes a lot of listening. Which we should be doing anyway….but one becomes hyper vigilant ... which is still what we should be doing. Cause, in the theatre, it happens every night, “for the first time.” That’s the job.

Our director, Stewart (J. Zully) has done a beautiful job crafting it moment to moment. I appreciate all the elements he and his design team have added. It’s a visually stunning play and it’s taken detail work, you know, like for the audience to feel the characters in that heat, the precise consumption of water as the journey progresses, than as you perspire and you have no water, how that affects the body and voice. There is a lot of detail in this and Stewart has been on top of it all. He has also allowed us to find the characters in the process and playing…and has allowed us to disagree with him and tell him why I feel I would not step here or there and, really, has been open to the actor’s feedback. And, more importantly, because he is an actor himself, he respects and loves actors. So his notes come from the director who understands actors' perspectives. You get different notes from a director who has little or no actor speak. Trust me. I would work for him again in a heartbeat. Besides, he’s funny as hell and always had a great attitude. That’s also important.

Nowhere on the Border plays on Fridays at 8 pm, Saturdays at 8 pm and Sunday matinees at 2 pm. The NoHo Senior Arts Colony is located at 10747 Magnolia Blvd. in NoHo. There is plenty of street parking but arrive early. For tickets call 818-761-8838.
Posted by Don Grigware at 7:39 AM