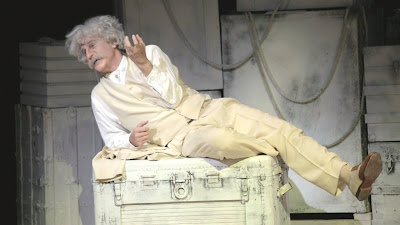 Film and stage actor Val Kilmer, best remembered for his now classic movie roles in the 80s and 90s including Top Gun, Jim Morrison in The Doors, Doc Holliday in Tombstone, and Bruce Wayne/Batman in Joel Schumacher's Batman Forever, is set to workshop an engagement of his Mark Twain evening Citizen Twain at the Kirk Douglas Theatre from June 28 - July 28. In our chat he discusses how it all began and how he feels about  inhabiting the skin of one of the world's greatest humorists.

Why a play about Mark Twain? Has he fascinated you since childhood?

Why Mark Twain?...(pause)  because ...because... Lincoln was taken. (long pause) That was a joke. I tried my best. (we both laugh)...For many years I've been looking for a film to direct. I finally found a story between Mark Twain and Mary Baker Eddy that I knew I would remain passionate about and that would stick with me for all the years it takes to write and produce and direct something.

Yeah. Particularly these days with independent films just not having the financing that they did even five or six years ago. Because of the crash, the money's really tight, and period films always have been a gamble. Every extra, every street, every street lamp, everything has to be ... everything costs money. It was about a ten-year experience putting together the film. Mark Twain was friends with Mary Baker Eddy and devoted a lot of time to her and her ideas. I found a really loving humorous story that is really a story about America, what I believe about America and what I love about it and where I think we're headed. So that's how the screenplay started. When I finally got close enough to start putting the financing together, I realized that producing is so all-encompassing as well as directing, that the day has gone every day by five or six o'clock and I would be saying, "OK, now I'm going to put some time aside to work on the role", because I'm going to play Mark Twain in the movie as well as direct it. I realized I just needed to stop everything and create the role. That's how the play developed.

You must have been fascinated by Twain to want to play him so badly! Did you love Tom Sawyer and Huck Finn as a kid? 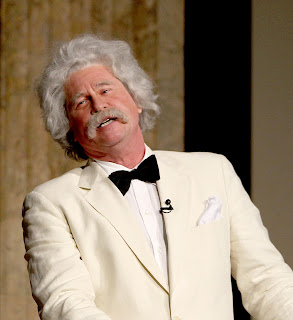 My father grew up with that oral tradition because he's a southerner who was raised in the Southwest, literally in the wild, on Indian land in New Mexico. My grandfather was a real prospector. My heritage is real live wild west stories. My father would tell stories around the campfire, and the way that he would tell them was out of that oral tradition, like Mark Twain learned how to tell the story...long nights on the river and on the riverboat with everybody talking, telling the story. Something I didn't know when I first started putting the movie together is that Mark Twain was really our first great or maybe first period...stand-up comedian and not just a comedian but a social commentator and critic. You think of guys like Lenny Bruce or Redd Fox, how they utilized race and language...Richard Pryor and Chris Rock, Jack Black, Lewis Black and people who are still able with a lot of love to be accurate and honest about some of our greatest hurdles like race and language.

How have you structured the piece? Is it chronological as to his life events?

No. Twain wasn't big on plot.(he laughs) What I've tried to do is mirror his thoughts that were his interests about autobiography, that he was never able to complete. Fascinating...I have lots in the play of how impossible it is to tell someone a story and have that kind of be a parallel to encourage the audience to contemplate maybe a more nonjudgmental position about America today. But it just wasn't as entertaining as other ideas of Twain's...a genuinely wise man who understood everything about human nature. It was just too great a temptation to resist trying to tell a complete story of him. I have kept some original rules; I've said this out of order, but I started out wanting to just do a stand-up routine...an hour five minutes, an hour ten minutes like stand-ups do. It seemed to be shortchanging the audience, though, of as much as I had to give about the character, a complete character study.

Have you taken what you've written from a specific biography?

It's really from everything, letters and notes, his autobiography and his great novels and commentary and newspaper articles. What I try to represent is the idea that he never really articulated, what James Joyce completed in his masterpiece Ulysses. The idea is that any human being is living in three different atmospheres if you will. There's his subconscious going on that nobody knows but him, his thoughts coming into him seemingly mysteriously in a dream kind of state. Then there's the physical reality, like this dressing room that I'm talking to you in, what that means, he would go on about how to shoot a squirrel and how much cigars cost when he was a kid and how many cigars fit in a barrel and how many barrels fit on the steamboat...go on and on and on about these seemingly disparate or meaningless details and what he was attempting to do, which they said he seems to have perfected, was to give a whole or dimensional picture of a person' s essence. By studying the historical part of life, that I'm talking to you in Culver City in Los Angeles and there's a Native American reality to this face and the Spanish part of and the Gold Rush part of this story, that's right here in the dust and the dirt, that's what he was going for. Certainly evident, you feel a freshness and timelessness in his masterpieces, where he's really captured the essence of being a kid. Freedom, what it's like; no rules out there on the river, and it's quiet, and you can feel God, like he says.

Do you use any of his famous quotes? 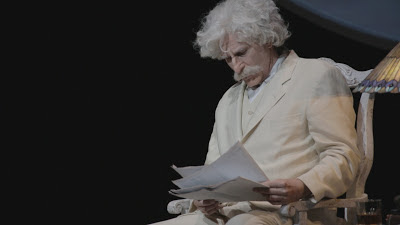 As many as I can cram in there.

Did you ever see Hal Holbrook's famous Mark Twain Tonight?

I've seen it several times, and I've met him. I've met him about my play, and he's been very, very kind to me. I've been very mindful of his amazing work.

As a side note, what is your favorite film role of all those you've done?

Oh gosh. I truly enjoyed the collaboration with Tombstone. Kurt Russell was so much fun to act with, and I had some memorable lines to play in that, and I really enjoyed working with Oliver Stone, and singing those songs... that was like a theatre experience... that was live.

So, do you think in Mark Twain you've found your ideal role, your part of a lifetime?

I'll tell you very honestly it's so gratifying to play a genius and have it be received so warmly, because his mind is so unique and I would say his love, it's almost like an overwhelming love of America. That to me is the core of his greatness. He loves everybody, the lowliest river rat and the laziest maid back in the kitchen...he was at Andrew Carnegie's mansion. He remembered everybody's name and whoever had a great story, whoever needed help, he was really our writer, the whole country's writer...and it's not me trying to sell you, to sell tickets to the play. It's who he is; it's very real. It's a real privilege to be involved every day in that kind of intellect ... and genuine heart...

Val Kilmer speaks very slowly, methodically and intelligently, with meticulous care in choosing every word, every syllable he utters, like a painter who exercises great caution with every stroke of his brush. Maybe out of fear or insecurity... or maybe he intentionally wants to give his audience only the very best of what he has to offer. That is what I take from it. He has obviously been bitten by the brilliance of Mark Twain. I can't wait to see Citizen Twain playing at the Kirk Douglas Theatre in Culver City from June 28-July 28 only, prior to a West End London premiere this fall. 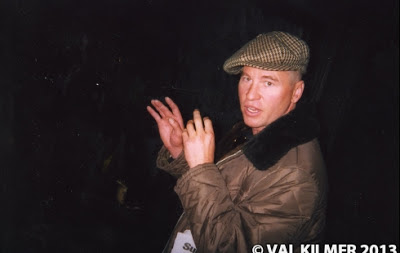