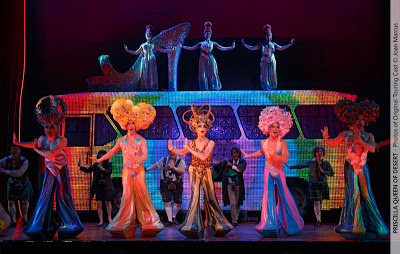 I asked the three co-stars of Priscilla Queen of the Desert the musical Wade McCollum, Scott Willis and Bryan West what they thought was the main reason for the show's amazing popularity.

Why do you feel the show is so successful? Is it because it is wildly entertaining? Or is it because it’s about a different lifestyle stealing the spotlight?

Bryan West said:
I think it’s a bit of both. Yes the show is wildly entertaining, and people can come and escape for a couple of hours, sing along to their favorite songs and let their hair down. But there is also something to be said about the voyeuristic side of the show as well. A lot of people are curious about drag and the whole burlesque lifestyle. This show lets them come and check it out.


Although many GLBT activist groups are so excited to welcome us to their cities, I think the story of Bernadette, Tick and Adam is really Everyman’s story.  Even among the three main characters there are walls of prejudice firmly in place.  And in fact, many of the supporting characters of Priscilla are often part of some type of minority group and experience some form of prejudice.  They too are forced into an unkind spotlight of caricature in a humorous way.  But all of it is done in such a light handed way that nobody in the audience feels like they are being preached at or being told they should believe or behave in any way different than they already are.

and...Wade McCollum said:
I think the show’s success lies in combining the gritty story of these three gender queer underdogs with very familiar well known hit songs and outrageously beautiful show stopping spectacle.  The characters are unexpectedly complex, hilarious and filled with heart, and as foreign as their lives may be to most people I think by the end of the play the audience feels the transpersonal tropes of longing for acceptance, love and family resonating within.  The last song "We Belong" kind of sums it all up, "whatever we deny or embrace, for worse or for better we belong, we belong together." 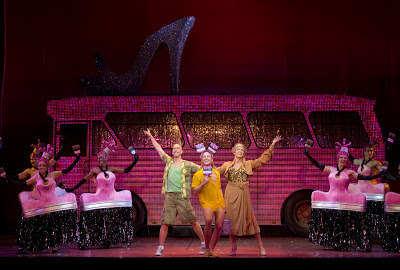 Remember: Priscilla Queen of the Desert the musical runs through June 16 only at the Pantages Theatre. Visit the Broadway LA website for times and ticket info:
http://www.broadwayla.org/
Posted by Don Grigware at 6:50 PM