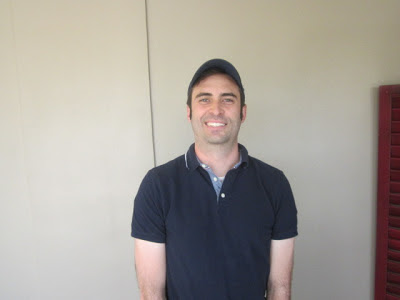 Playwright Brian Golden, who is currently artistic director for Theatre Seven in Chicago, hails from Iowa. His latest play Cooperstown is being produced at The Road Theatre's second space at the NoHo Senior Arts Colony on Magnolia Blvd. In town for the weekend, Golden held three talk-back discussions after the Friday June 7, Saturday June 8 and Sunday June 9 performances. In our chat, he describes how the play got started and what it means to him.

Tell me first about Theatre Seven.

It's the company that I started and am artistic director of in Chicago. We do...we have not always done this in our history...but right now we exclusively produce work that is set in Chicago. So we have a goal, a mission of really telling local stories and engaging the community to see plays that are about their city, past or present. We have a real focus on producing local work, and this play Cooperstown was developed and world premiered there in 2009 before we had an exclusively Chicago focus. For a while we had this notion that we could tell stories not set in Chicago but that still really dealt with Chicago. Chicago is a very segregated city. Chicago is also a city obsessed with its sports and its sports heroes. We felt at that time (2009) that this play (Cooperstown) fit into our mission to be a play that would really matter in Chicago, but due to the new rules we wouldn't produce it there in 2013.

When did you change this rule?

We've sort of evolved into that newer focus for the mission in the last year. We get a lot of excitement out of...it's really exciting when someone will be like, "That part of town that I drove through this week, I thought of it in a whole new way because of that play." I like that about local storytelling.

Is Cooperstown your second or third play?

It's my third full-length play that has been produced. Cooperstown is the first to be produced in LA as well as Chicago, but I've had other full-length work produced in New York, Philadelphia, St. Louis. One of my plays was in the midst of being translated into Russian for a production in St. Petersburg, but I just never heard from that person again. (he laughs)

You are young and didn't live through the 60s. How did you get the feel for it? I experienced the era you are writing about in Cooperstown and you have nailed it...and with such a wonderful sense of optimism!

I was born in 1982. Jackie Robinson has for a long time been a real hero of mine; I'm a baseball fan. I'm really interested in that time, but the play actually came about because I was taking a writers' workshop at Chicago Dramatists, which is a really special place to develop new plays there. That was a deadline workshop. Every week you had to come in with a certain amount of new pages, and they had to be pages written for a mixture of five actors that they gave you. These actors were: a 35-year old black man, a younger white man, a younger white woman, a 25-year old black woman and an Asian woman...as it happens, the makeup of this play. And on the first day of that class, we were doing a sort of meet and greet between the writers for the class and the actors. Cecil (Burroughs), who is in this Road production, was one of the actors in that class. I had the blue Brooklyn Dodgers hat that I have on... I had that on right then, and Cecil mentioned that he was originally from LA and liked sports. And I said, "Oh, Jackie Robinson. That's my guy! You must be a big Jackie Robinson fan." His response was sort of like "I don't know. I find him overrated." I became really interested in that interaction both because of what I was trying to do, "Oh, I'm a white guy who's going to prove something about myself by saying I love Jackie Robinson"...and I was also interested in why a sports fan who was a Dodgers fan who was an African American man like Cecil might not be as in awe of Jackie as I was. I was interested in at least starting as play that would investigate that question of why someone who looked and acted like Cecil would not think Jackie Robinson was as big a deal as I did. That was the initial seed for the play that grew more complicated and problematic with all the characters involved.

Talk a little about the hope expressed in the play.

When I first started writing the play, I had just finished reading Howard Zinn's book A People's History of the United States. I was really interested at that time and still am in what history or historical moments look like seen through the eyes of ordinary people. Writing a history play never crossed my mind in a million years ...that anyone famous like Jackie Robinson would be a character in this play. I'm interested in what history looks like from the ground up. In trying to capture that feeling of change I became much more interested in doing it about 5 ordinary people than about anyone who's been in a history book.

What do you want audiences to take away from Cooperstown regarding racism or anything else prevalent in the story?

I don't know whether I think like that necessarily as a writer. My job is to tell a really compelling story that engages. Baseball is the setting, but this is really a play about family, what family means. That's the core of the play for me. I wasn't sure how I could get there as I was writing, but I knew the last line had to be "We can hope." I didn't know why that was. The idea is said by one character to another. I think it's a bigger idea. A couple of months after we elected President Obama, that idea of "We can hope" as a remedy for things was an idea that I believe in. Whether or not that's exactly what the audience takes away is out of my hands, but it's a very intentional and purposeful way for these last words to hang in the air in this play.

Are you happy with the Road and this production?

It's a scary experience offering a play when you're not going to be in the room as it's being crafted. Everyone in The Road has been really great. The first time this play was produced it was my company. Although that company was on board obviously with the production and had a reason to support me, no one here actually does. To come to this town and to meet these people and to be able to walk into a room where people are feeling good things about the work and they feel like the work has given them an opportunity to tell a story they care about as well, when by all rights they are people I have never met before, it feels like there really is an investment in the story and that investment is backed up with a real artistic commitment and talent... this is...happiness. (He laughs like a little boy who has just been given the most joyous present.)
_ _ _ _ _ _ _ _ _ _
Director Darryl Johnson, who sat in on the interview, added that "it is not often that you read something that you hear in your head crystal clear, that you see the vision of it clear as day; it's like I knew exactly what this should look and sound like. I relate to this entirely. We share the same hopeful attitude about the world, so I totally connected with that right away. And we got really lucky with this cast top to bottom! And The Road had been producing such edgy material. I wondered whether anybody would be interested in Cooperstown, because nobody dies, there's no drug abuse, no blood. The response from the company was A breath of fresh air! A good classical old-fashioned story well told!"

So happiness abounds at The Road these days and for good reason. Just as a side note, Brian Golden confided in me that he's working on a new play that is 360 degrees different from Cooperstown, about conspiracy theories and the people who believe in them, citing a missing child case from Iowa, his state of birth. With this young man's integrity and fine writing skills, I'm sure it will be another insightful and riveting play. Go see Cooperstown at the Road through July 20 at 10747 Magnolia Blvd at the NoHo Senior Arts Colony!
http://www.roadtheatre.org/