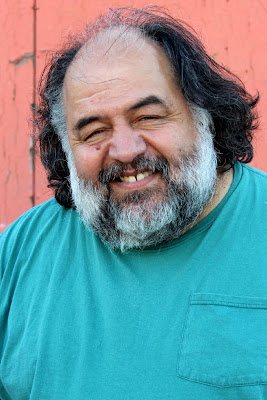 Director L Flint Esquerra has directed two Tennessee Williams' plays A Streetcar Named Desire and Cat on a Hot Tin Roof at Group Rep Theatre in NoHo in the last few years to great acclaim. He is currently directing their next production Loose Knit set to open August 2. In our conversation Esquerra talks about the play in detail.


Did you direct Loose Knit before? I understand that this is a revival production.

No, I have never directed this show before. I think 'revival' may be a bit of a misnomer, in the sense that, yes, it was done somewhere else sometime before and now it's being done here, but no, none of our cast or crew has ever worked on it prior.

Tell  our readers what the play is about.

Oh my, that is a complicated question. On the surface, it's about 5 women -- friends and 2 sisters - in NYC, who get together weekly for a convivial knitting circle. Digging beneath that -- all the big themes -- life, love, family, friendship, America, wealth, race, work -- Ms. Rebeck (Theresa Rebeck, playwright) is not shy about digging deep.

Is this a woman's play in the vein of Steel Magnolias or Real Women Have Curves?

There are similarities -- strong bonds of sisterhood, etc -- but I think Ms. Rebeck isn't afraid to travel into some darker corners...though with a very biting sense of humor and wit,

Define the male character Miles and how he affects the women and their various issues.

Ah, Miles -- well, of course, it depends on who you ask. If you ask Miles, he's a hardworking professional who has been very successful, and now he is simply seeking, in his straightforward pragmatic way, to find female companionship. If you were to ask the women he dates and associates with, they'd have very different opinions.

We don't see as many battle of the sexes plays being produced. Why do you think that is? Have women become that independant and empowered?

I can't even pretend to have an answer to this. It'd require hours and hours of discussion time to give the question justice.

What do you think is the message of the play?

Ms. Rebeck is so very skilled and talented that there are a multitude of messages, or perhaps it's more accurate to label them as 'topics of conversation' through out the play. She strongly gives each character their point of view and argues it masterfully, and I don't think she spoonfeeds us an answer. Food for thought for the audience. That being said, at the end of the day, I think the importance of love, hope, and friendship is recognized,

What are your specific challenges as director?

Bringing an honesty and truthfulness to the stage. I'm blessed with a terrific cast and crew, so that helps

What else has been happening in your world of directing? Any other work coming up?

Earlier this year, I directed Tuesdays with Morrie at the Sierra Madre Playhouse. Upcoming, I'll be directing the world premiere, Representative Misbehavior a farce by Tom Walla, for the NEO Ensemble Theatre.

Tell our readers about the cast you have assembled for Loose Knit.

I was overly fortunate to have a lot of talented actors audition for the show. At one point, we were even considering double-casting, ala Antaeus, but ultimately we went with one main cast. The relationship of the two sisters was vital, so I put much emphasis on them. Stephanie Colet and Marie Broderick have an excellent chemistry and complexity that serve those roles well. The other women filling out the cast -- Cathy Diane Tomlin, Lisa McGee Mann, and Julie Davis all captured the special nuances and qualities that their roles of a therapist, lawyer, and actress/caterer called for...and, importantly, also bring much humor to their personas -- which can be a tricky thing, especially when traversing some of the more dramatic sections of this comedy's terrain. Doug Haverty plays Bob, Lily's husband -- everyone seems to have a thing for Bob and Doug, quite naturally, brings that likeability/adorability factor to the role. Todd Andrew Ball has the challenge of playing Miles (we spoke a little about this character earlier) -- a very complex role and Todd skillfully navigates the nuances of this complicated and polarizing character. You need a talented cast to have any chance of succeeding and we're blessed with a wonderful ensemble. I hope many of your readers will come and enjoy their fine work!

Add whatever you wish that we have not mentioned..

Ms. Rebeck is one of the most produced playwrights in America. It's a pleasure to work on this play of hers. It gives the actors and myself much to explore and dig into. It's great being back at the GRT -- they are a wonderful and welcoming community. We're working hard to make this an excellent production. We'd be honored if many of you would come and see it! Thank you!

Remember the Group Rep at 10900 Burbank Blvd in NoHo half a block east of Vineland Avenue on the right, August 2 to September 8. Visit:

thegrouprep.com
Posted by Don Grigware at 2:34 AM