The Road Theatre Company proudly presents Michael Perlman's At the Table at the Lankershim Arts Center May 17 through July 21. This riveting play deals with six so called liberal friends who realize on a weekend retreat that they are not as enlightened or diverse as they thought. Every week we will spotlight a member of the cast. This week the light shines on producer/actor Ray Paolantonio. 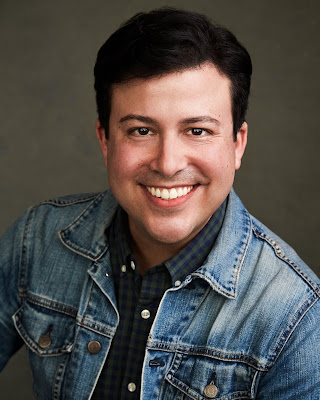 Who do you play and what purpose does this character serve?

I play Elliot, one of the four long-time friends since college who invites his even longer-time best friend since middle school to spend a weekend together at Nate's parent's vacation home. I clearly didn't think things through as new and old friends don't necessarily mesh in this particular scenario - a weekend retreat where there are no phones and no social media so all we have to do is look up at each other and engage in conversation - not exactly easy to do these days, even with plenty of wine to loosen those lips. No topic is off limits and I find that in bringing people together, bringing up current topics and tough conversations always lends itself to conflict. And that's where the drama unravels.

I'm that friend, that 'safe' gay best friend who has the best intentions to bring people together, be that confidant to every situation, all while inserting himself in the middle of every conflict and as a result becomes the butt of the jokes. I have not one but two female best friends whom I've always been there for, the friend to lean on, offered advice, comfort, and always put their needs before mine - until I can't take it anymore and just unload on them. Which then leads to a lot of apologizing, not just for creating awkward circumstances, but quite frankly apologizing for who I am. I apologize a lot. I take the fall for a lot of the jokes. I compensate for being different by trying to make everyone else feel okay for having me around. I connect a lot to what Lauren is experiencing, but from my perspective as a gay man - however white - still gay and still trying to live my authentic life - so that by the end of the play I realize that I'm really not being my authentic self no matter how hard I try. I'm not precious, not a relationship guy so I'm left questioning my identity throughout most of the play but especially at the end it's not resolved by any means. Just like Chekhov!

What are your challenges as an actor and how have you prepared for the role?

The dialogue is so conversational and casual at times that it could seem as if we're improvising. That's a result of very naturalistic writing so that when you're performing in a very physically intimate space, there's no faking it. The challenge with portraying natural conversation around a dinner table is there are multiple conversations - which happens all the time in real life so to then look at it formatted in a script and breaking it down as to where your attention needs to be given to and from where your intention comes from was very important to the rehearsal process. We had eight weeks which is a very long time to rehearse, so much of what we did early on was not only script analysis but to improvise situations where we were eating and drinking... and smoking - all to calibrate how that feels, how it effects you physically and how it changes even the slightest word you may say to another character.

Much of the play I'm inebriated and finding the moments to build upon that calibrate how you behave after a certain amount of alcohol, then smoking, what time of day, how much you've had to eat and when your head actually hits the pillow. All of those behaviors we exhibit in everyday life to then recreate in an intimate setting. Yes, all of that, ALL OF IT, added to the challenge of tackling this particular play. Oh, and being one of the producers too - so pile that on - and I might have had a meltdown or two, but I just used it. That feeling of drowning, which my character talks about, is not only literal but figurative. If it's real and honest to you in the moment, I use it.

What is the theme or message of the play?

As the producer, when I first read the play I immediately felt like we [The Road] had to do it. It has a large ensemble cast calling for diverse actors and that could certainly be cast three times over from within our company. Furthermore, it wasn't just a play that could be cast diversely - it required it. It needed to be leaned into because it's a play about how we go about even having the conversation about diversity. We define diversity by labeling categories - African American, Asian American, LGBTQ - and each has a value assigned to it so it can fit into the hierarchy we currently live in. I certainly am no expert on this, but once I started reading it it felt like a play that needed to be done now because of the conversations it provoked. Initially, I just wanted to do a reading of it but it was deemed too long. The manuscript was 185 pages. So I accepted no and walked away. I felt like maybe I didn't know what was appropriate or what worked best for the company so I sat on it for awhile.

Then, Michael [Perlman] contacted me to see if I was still interested because another company in town expressed interest. Well that lit a fire under my butt and I asked for him to give me two weeks. I pitched it to the artistic board and was given an opportunity to do a reading last summer. That reading sparked a lot of conversation - both positive and negative - sometimes uncomfortable conversations about race and identity, but they were conversations that needed to be had. I listened a lot and to many different points of view. That's when it hit me in the gut, listening to my gut, that we had to do this play. Once it was slated for the fourth production this season, I committed to being a producer because I wanted to give it the care and vision it needed and deserved. I feel both lucky and grateful to be behind this play at this time in our company's history. It's been an incredible - at times overwhelming - journey that comes from the heart.

Talk about your fellow cast members and your director.

I was very fortunate to be involved in the process of selecting a director as well as casting. That's where my producer instincts kicked in. I felt very strongly about leaning into the diversity of the play so I was determined to cast actors who were true to who they were being asked to portray (African American, Asian American, Bi-racial, LGBTQ) as well as finding a woman of color to direct. Having a diverse female perspective to care for each and every character but especially the central character of Lauren was essential to grounding the play in reality. Finding an actor's director in Judith Moreland was a gift. From our first meeting through the audition and rehearsal process everyone involved felt an instant connection, respect and admiration for Judith's work ethic and her keen eye for interpreting difficult material. She elevated this production so that it resonated with a broader audience.

Much of that came by being very specific in casting - not only casting people of color in roles that required it but also casting out actors in gay roles was very important to the message of the play. Judy lead our ensemble through a rigorous analysis of the text which allowed all of us to bring our authentically lived experiences to the table. Lots of lively discussion and debate was had at the table. Yes, we worked 'at the table', so the metaphor of the table whether it brings us closer together or shows how far apart we really are, was incredible to witness in real time. From speaking with company members who initially had reservations about the script, to reconnecting with them after they've experienced the show, saw it evolve to such a richly lived moment of theatre. It's all a testament to the triumph of Judith's direction. What a rewarding journey this has been. Thanks to all who have supported us.

At the Table plays at the Lankershim Arts Center 5108 Lankershim Blvd. North Hollywood, CA through July 20. There is street parking but arrive early. For tickets call 818 766-8838.
Posted by Don Grigware at 10:28 AM