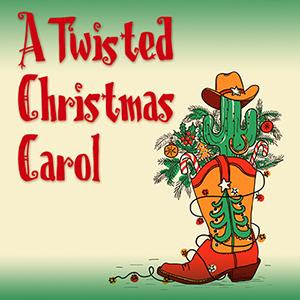 This interview is directed to playwright Phil Olson, so tremendously popular for his Don't Hug Me series of musicals. His new play A Twisted Christmas is about to open Upstairs at the Group Rep on December 14.

Tell our readers about your A Twisted Christmas Carol. When you say that it is the Dickens tale Texas style, what exactly do you mean? Is there a lot of the humor of Don't Hug Me and its characters in this piece?

A Twisted Christmas Carol is a Texas spoof of Charles Dickens’ classic story, “A Christmas Carol.”
It’s Christmas Eve in a small west Texas town and cantankerous barbecue joint owner Buford Johnson gets in an argument with his wife, Darla, tells her he's skipping Christmas, he storms out of the restaurant, goes four wheeling in his pickup, gets hit by a twister, rolls his truck and goes into a coma. He comes back in his dream where he's visited by ex-business partner and barbecue king, Hank Walker, who plays the ghost of Christmas past, present, and future. Hank takes Buford (Scrooge) on a journey similar to that in Charles Dickens' "A Christmas Carol" only Texas style.

I understand that your show is playing in other states this Christmas? Tell us where.

Is this the first Christmas show that you have written or have there been others?

Your comedies are very popular and well received. What is your secret for writing successful comedic pieces?

I'm not sure if I have any secrets with my writing. They say to write what you know, and I tend to write about my experiences growing up in an emotionally reserved Scandinavian household in Minnesota. My father would tell us he was the Norwegian who loved his wife so much, he almost told her. We never hugged growing up and I never once heard any family member say "I love you." Not once. The thing is, I never felt that my parents didn't love each other or the kids. I just assumed that they did. When I learned how strange it was to never hug or say the "L" word, I started to write about it. My stories tend to be about relationships dealing with a lack of communication, affection and emotions, and the comedy in that, and how, ultimately, it's okay to hug or say, "I love you."

When my stories started playing all over the country and internationally, I realized that people all over the world could relate to these issues. It wasn't just a regional Minnesota/Scandinavian thing. With A Twisted Christmas Carol, I brought the same sensibility I experienced growing up to a small town in west Texas. Because so many theatres around the country are producing the play this year, the experiences I had growing up in Minnesota seem to translate well to a small town in west Texas.

Is there a final comment you care to make?

I hope that audiences enjoy A Twisted Christmas Carol as much as I enjoyed writing it. A big thank you to all those who support live theatre!