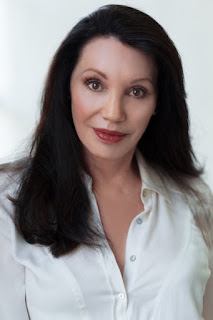 Actress/singer Suzy London loves her work with a passion. She is one of those gifted performers who can do a role brilliantly in a play onstage and ... perform equally well in cabaret. In our conversation she tells our readers about how different one arena is from the other. She will do her brand new cabaret show Tattoos on My Heart at Sterling's Upstaris at the Federal on Sunday January 19, 2020. The show is described as an evening of country, bluesy, jazzy tunes. London relates to us with great humor about singing country.

Tell our readers about your new cabaret Tattoos on My Heart. Is it different from you other cabaret shows? If so, how?

SL: It is different, first of all because of the venue for one reason. And...anytime you do a cabaret, you can't just take a show as it is and put it into a place where it's not going to fly. You have to look at the kind of audience you're going to have and what that's going to be like. For instance, there are people in the audience who are drinking and sometimes eating, and so that limits their attention span. If they're there with a group of people, maybe they're talking, so what you do is you have to grab them and keep them or you're not going to be listened to.

I did this show specifically for the Federal. I've never done this show before. I had had great success at the theatre (Group Rep) doing the theatre version of my previous show Around the World with Suzy London. That's where I sang in twelve different styles of twelve different languages. It was sort of autobiographical of my experiences around the world. When I went to the Federal and looked around, I realized it was not the right place for that show, because it had slides and it was a more theatrical production.

How did your musical director play into all of this decision making?

SL: I talked about it with him - Robert Brandzel, and this place lends itself to something light, something fun and something funny. I have had some funny experiences with singing country music because I am a classically trained singer.. Yet, I ended up writing country jingles for a while when I was in Las Vegas. I knew nothing about country but, hey, I got the job. I did a lot of demos for country singers.

Also, right now, you have to take into consideration what is happening in the city you're in, the world you're in, and it's very strifeful. There's a lot of strife going on, a lot of unhappiness going on. I think the number one thing about entertainment is just sort of take people out of the drudgery and misery and upset. So, I wanted to do something that is light and fun. There's a lot of comedy in this show. I do a couple of novelty numbers and a couple of comedy numbers. A good laugh goes a long way.

Robert Brandzel is a joy to work with. I've worked with him for years. I met him when I was hired to do Buttercup in H. M. S. Pinafore. Even though I'm very thin, we did a very thin, skinny Buttercup with humongous breasts. We've done many shows together around town since. We don't even need to speak, we know exactly where we need to go with the music. He listens to me and says, "This isn't feeling right to me. We need to change this." He's a joy...everything about this show has been lighthearted and fun. I think when you get up to perform it, that carries across to the audience and becomes infectious. We need that right now. I'm very excited. There are several songs that I wrote. I put together the flow of  the show with the stories. I do have funny stories about ending up singing country songs in foreign countries. They had no idea what they heard; it's just American to them. (we laugh)

What is your goal with this show?

SL: This show is meant for a place where people are having some food, drinks and fun. Just the experience of doing it is a joy for me.

It sounds like it may be perfect for cruise ships.

SL: It would be.  That's a good idea. It is very self-contained. I don't need anything but me and the band.

What is the high point for you doing cabaret?

SL: It's much more personal. When you do theatre, you can hide in the character you're playing. and you can let your emotions come out as the other character. But in cabaret, that is not going to work. You cannot have that mask. You have to expose yourself. You have to expose your painful, hurting side, your laissez faire who gives a damn side...your soul, and get through it with a sense of humor. I get through life because I laugh about it.

That's great advice. Do you have a favorite cabaret performer?

SL: I love Liza Minnelli. I know her. Many years ago I met her at an AmfAR Aids Benefit
Man, she really puts herself out there, and I admire that. She just lets it show. And she's a very sweet person. I was taken to see a show of hers when I was a kid, and it was magical. That's I think one of the things that inspired me. And what a small world, Robert Brandzel worked with Liza as well in the beginning of her cabaret career. He thought she needed honing, but had something very special.

I love Liza too! Let's switch to acting. You are so good at doing big, bold, down.trodden characters, truly bringing them to life onstage. You cement the nitty.gritty of the role you are playing. Do you have a favorite role?

SL: I always enjoy doing musicals. I love singing and dancing, so of course I loved the role I played in The Ghost of Gershwin.  I also enjoyed doing Steppin Out at Group Rep directed and choreographed by Stan Mazin. She was a character with a very interesting arc. I always like characters that have a really clear, distinct arc. I'll tell you right now I am working on a fabulous show about Tallulah Bankhead called Looped, in which she loops dialogue for the film Die Die, My Darling!

I saw that. You would bring a lot to that role.

SL: Thank you. I'm having such fun. I'm hoping to do it somewhere. Bankhead is so outrageous.
As I've been working on Looped. I've found something very interesting. I wondered why Tallulah made such a religious reference and then I saw the film Die Die, My Darling! that the looping was about. In it she's a religious fanatic in that role. Then I got it about her as a person and as an actress. She was the type who became the person and let it influence her, and let it influence her in her private life ...  and it came out in the recording session. By the way, a lot of Looped is taken from the actual recordings of that day when she went to loop that line. It has told me a lot about her as a person, how she sort of becomes the character and imbues everything in her life.

Do you have a mentor? Someone that inspired you, other than Liza?

SL: You know who I also admire because I have seen her work on film and onstage...Annette Bening. She is amazing. You see the kind of vocal skill and control that she's got. You have to be able to project onstage without it looking like you're projecting, and withoiut affecting the tone of the character or what you're trying to say. She's brilliant. She's definitely an inspiration.

What would you like audiences to say about you? She was...

SL: Fun. She was so fun. That was such a great night.

Remember Suzy London in Tattoos on My Heart, Sunday January 19 at 7 pm. Sterling's Upstairs at the Federal is located on the second floor at 5303 Lankershim Blvd in NoHo.