Actress Susan Priver is a Los Angeles native and former ballerina. The story of how she started in ballet and finally crossed over to acting is the subject of her new mmoir entitled Dancer Interrupted. In our conversation she gives us great detail about the devastating ups and downs of her life. Her passion will make you want to rush out and buy the book, which is a great read.

The style of your book is so affecting. It was like reading your personal diary. Your thoughts and emotions jumped out and hit me. I understood.

SP: OMG, that's what I wanted to do. Let me tell you, it took 8 years. You are a writer by profession, whereas I am an actor.

I am an actor too.

SP: You are an actor too, but you have been writing longer than I. Not all actors can write, but I think actors learn the most important thing is the dialogue, what the person is feeling. I did have diaries from this growing up stage and I remember a lot, not everything, but everything that's in there I remember very distinctly because of my emotional place. I had a tough, tough time with people that I loved.

I felt so sorry for you spending time on the couch and you didn't want to leave it. Your father was hard on you, but he was so funny in his approach.

SP: Let me tell you, I hear kids now. How do you raise a kid? My dad was... "You get your ass off that couch". He was raised a certsain way and he was what he was, but...he didn't understand exactly what I was going through. He didn't have the empathy, but maybe the empathy would have been bad for me.

He did understand what your mother was doing to you and how that relationship was hurtful to you.

SP: She had empathy. My mom enjoyed being a nurse.

She wanted to keep you dependant on her.

SP: That's exactly right. She got some kind of enjoyment out of enabling me to sit there and just fall apart. I've never been a parent, and will never be a parent obviously, but it must be such a hard thing...to be a parent.

No, just from reading about him in the book. I thought he was the best of your boyfriends, so kind and understanding. Gregory, the Russian, I wanted to take him and twist his neck.

SP: I think what I wanted to do with Gregory was contextualize in the way that I was still a bunhead. Dancers...I don't know if you know that world at all...I think the acting world is a little broader, because you are fencing, you're dancing, you're learning great playwrights, you're learning how to present yourself in a way that isn't just the veil of ballet, which is extremely difficult. The amount of commitment is more than what actors put in, and it keeps you from many other things. Learning that people take advantage of people. Perhaps my family didn't prepare me for that. My dad would have known, he was a lawyer. He was used to bad things happening in the world. But, maybe I didn't listen. I just was hopeful, hopeful that everything would be ok in those early years. Then when I was out in the world, when it was time to meet someone, maybe I wasn't ready for...I enjoyed being put down. I was a masochist.

Oh yeah, I felt bad for you as I read. I kept thinking, "She's got to break out of this."

SP: And I did...eventually. I did work in a workshop for a while about the craft of writing. I got better as I went along. In terms of the book, people want to feel like they are not going to die. It's not like a Hollywood movie, but I did survive certain things, and a lot of people don't survive.

One thing I did not quite understand. Why were you fired from the Cleveland Ballet ? They said "We have to let you go." What was the reason?

Was it a weight thing?

SP: No. I was the skinniest I had ever been. I don't know exactly what it was, whether it had to do with funding...and they didn't need my services anymore. I didn't stay in line with people very well. I was in the corps de ballet. It might have been that. I was not a soloist. Maybe they didn't need any corps dancers...maybe they needed a soloist but they needed someone better than me. I don't know, but ballet never had a lot of money in these regional companies. They get grants and they bring people up through the schools. City ballet and American Ballet Theatre in New York have money.
Because it was never explained to me, that made it hard. It makes you question yourself. You just go get another job.

I loved your audition for Gwen Verdon and Bob Fosse in New York, where they told you to find a better song. You did "Happy Birthday"! (we both laugh)

SP: I saw people bringing out the sheet music. I didn't sing and I went to the audition kind of on a dare. Fosse liked tall ballet dancers, but ballet dancers who could sort of sing.

Fosse had an addiction problem. I try to bring that out in the book. I think creatives tend to have that.element in them, if they're any good. We're addicts. It's sad but true. A behavioral psychologist who is a professor at USC read my book and said he wants to give it to his addict students. There is a thing... How do you find a self without your addiction? For me it was finding a voice without.dance.

I wrote down that the message of your book is learning to love yourself and taking your place in the world via the arts, first as a dancer and lastly, an actor. In the Forward, you tie them in so well, when you say that ballet is poetry in motion. "I couldn't live without it." Later you add,  "how will I ever get poetry back in my life?"

SP: I had that in my journal. Ballet is a hard icky sticky world but it does have poetry. Then when I took a job as a secretary, I couldn't do anything. My dad thought I was kind of an idiot. My dad was really more of an atheist than Jewish, but in Jewish families, education is everything. Being a baller dancer is really not what they do. But I was weird and we had a little bit of a weird family.

Why did you write the book? For many an autobiography is a catharsis, but I think it's more than that for you. Sum up the various lessons you have learned that have brought you to this current state of bliss.

SP: For me it was to find my particular sensitivity to what had happened to me, in another craft. I always use that sensitivity in the characters that I like to play, particularly in Tennessee Williams...and Pinter. It was a way of creating one full thing that was my own. It was mine. It came directly from my experience. I like to filter that sensitivity into roles that I am capable of playing. I did do Lorraine Sheldon in The Man Who Came to Dinner, which is completely broad and bombastic, but I learned how to use my strength and my kind of witchiness and brought that to it.

So having the experience of doing Blanche in Streetcar and writing this book that has pure emotions in it, pure thoughts in it...I had to shape everything and make it into a craft. I did have an editor, and it's crafted.

I'm also a yoga teacher, and I love teaching.You're giving back. As actors we take people into another world. All people are attracted to storytelling. I'm attracted to storytelling through playwrights. Everybody has a story. It's putting it together and contextualizing why does this relate to this and that. I had to work out my life, that I really didn't have to be a doormat and be used by men like Gregory, a dark passionate Russian who was also an alcoholic. I also had to work out that not everybody hated me and wanted to hurt me as he did. And...to gain confidence, because when I stopped dancing, I had zero confidence, and that's why I attracted certain kinds of men in my life.

Dancers do exactly what they're told to do. It's manipulation and unless somebody gives them a backbone...and my parents were not really bad people. I just didn't listen to that. And as far as drug addiction is concerned, I had to say loud. "You did this to yourself. You are going to have to dig yourself out of it." You cannot isolate yourself. I isolated myself because I was afraid. You learn from your failures. I became a strong human being. I am a survivor, and I hope that the book will help people to realize that you don't have to join a cult or take anidepressants. You have to dig down and embrace your darkness, embrace the things that make us human that will allow you to rise above that.
The dance world taught perfection, Hollywood taught having your face lifted to be beautiful...no, it's what comes out of you: that's what you look like.

There will be signings of Dance Interrupted

on April 13th at Book Soup, Hollywood with John Fleck---Q and A
and on April 27th at Vroman's, Pasadena with Lian Dolan---Q and A

These events are subject to change depending on the state of the Corona Virus. 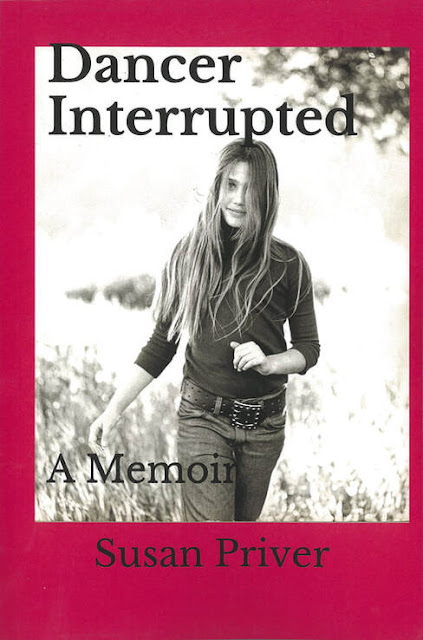