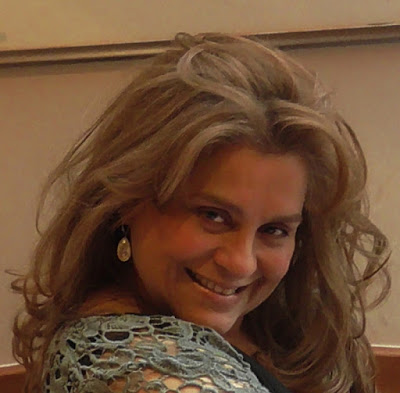 "The Aye" is adapted from Ana Isabel Ordonez’s "The Extraordinary Love Story of Aye Aye and Fedor." The choreography comes together in a sparkling fusion of music, dance and narration which was performed last week Friday October 7 in Cape Town South Africa by the Jazz Dance Theatre with Sifiso Kweyama as choreographer. The shows honored Nobel Peace Laureate Archbishop Emeritus Desmond Tutu, in celebration of his 85th birthday, and with the opening choreography for the annual Peace Conference in Cape Town. This was the world premiere of the show. The book has been translated into four languages and has graced the shelves of the Beijing and Frankfurt book fairs. The dance theatre version was seen for the first time by South African audiences. The Aye is quite simply a magical show, featuring a fantastic set, a superb jazz-rock score, inspired choreography and mischievous masks hand made in South Africa by La Carla Masks. Before the event author Ana Isabel O discussed elements of the show for our readers. She offers an in depth description of the CDs of the show that include narration and music. She also expresses her beautiful feelings about Palestine and Nelson Mandela's cry for freedom there.

Explain the story briefly and how it has been adapted to the stage.

The dance theatre extravaganza depicts a beautiful and magical love story between two threatened animals, a lemur Aye Aye and a white lion Fedor--each of whom define the term "opposites attract" in a fantastic universe called the Musical Forest. The narrative is enhanced and fleshed-out via weighty, emotive roles for the dancers.

The Story/Ballet is magical; just imagine : midnight. Not a sound in the jungle. Suddenly an explosion of music and lights reveals a larger-than-life wildlife experience. Lights tear across the bush landscape catching the darting image of an animal reaching a unique place, the Musical Forest. It is a special moment when all animals in the story are reunited, finally free. They have escaped from a zoo with the courageous help of a lemur, Aye Aye, inspired by her love for Fedor who bravely reunites all animals who are now allowed to celebrate who they are. The story has a happy ending, thanks to the courage and quick thinking of Aye Aye and Fedor. In this set they and the other animals of the Musical Forest emerge, dancing to express their unique abilities and special traits. All the animals begin to reveal themselves and their wisdom. It is the contemplation of this gift that keeps these animals deep in thought.

In future events you will find the same book adapted by the Martha Graham Dance Company in New York with choreographer Virginie Mécène.

Are you excited about the prospect of seeing these sweet adorable stories come to life?

I'm happy and contented with what life gives me. This show is cause for inner celebration; I’m in the process of re-wiring my brain and seeing different outcomes from different situations or portrayals from the past. These children’s stories are important for me; they’re like my secret place, my secret garden where I'm secure and safe; I can be there only with whom I trust, the objects of my interest are many like fire, earth, water, air, plants, animals and the parts of animals, the physical universe, the essence, the universal ideas connected. Every performance is exciting to me, but I'm a shy person. I prefer my secret garden; it’s simple, joyful like a playground.

When the background for the show was recorded, 2 CDs were made: one, narration and the other, music. Talk first about the narration-who was chosen to narrate - tell me about his background in the arts, what he accomplished or brought to the stories and how satisfied you are with the results.

The narration was recorded in New York City. I chose Dean Bowman; he's my dear friend. I love what he does and who he is inside and out. A real pro! He's amazing, known and praised worldwide for his angelic voice. He began singing in church and has worked in both gospel and jazz styles. Dean regularly performs all around the world. I believe my tale and ballet captures Dean in an intimate performance that showcases his smooth, honey voice and winning delivery. His narration of my love tale/poetry never sounds phony or forced and the tale itself exemplifies directly such an authenticity. I want to say that the love story of two threatened animals is a wonderful tool I use to express feelings. It conveys functions, pattern, pulse, rhyme and structure. Using a simple language one can show the way beings bond and express emotion and encourage imagination as well as story-telling. I want to see what the dancers can express with their bodies, and the music I believe is wonderful.

The narration is essential, like singing has many surprising benefits for children and audiences. However, the meaning of music or dance is not dependent on language. The first response to music is through the movement of the body. Like singing, on children’s stories, narration is an aerobic exercise and that Dean can do, man he can do it very well! On my work at the kids school in Mitchell's Plain Township I have observed that reading and singing together improve children's behavior. It helps them bond – whatever the song or languages are. They can express their feelings of joy or excitement, of being scared or proud. Musical activity involves many different parts of the brain, so narration and listening (which involves music and language) help develop these areas. To me the importance is on movement and dance. Watching children and adults listen to music is a crucial part of assessing their understanding and tolerance, and we see at such times a foot keeping time or hands dancing or sometimes a look of quiet wonder. By communicating freely with voice, face, and body Dean expresses ideas with confidence, empathizes with others with his beautiful voice, people from different cultures and backgrounds. Voice, music and dance help us to become more imaginative, self-aware and collaborative global citizens. Sounds like I'm satisfied, right? (laughing)

Now do the same with the music. Who composed the music, what it is like, how it varies in composition and style from section to section, and whether you are happy with it.

I had the opportunity to work with the composer many years ago for my "Touch of Noir" project and the Bad Big City Band we formed for it. I recalled that good moment and requested him to compose the music to be used solely for my project and for ballet. I own the copyright of that music and the cds are released on my label; they cannot be released or reissued elsewhere. Michiel is the Director of the Jazz Pop Music and Dance Department in Niemejen, Netherlands. An absolute maverick on the piano and in his compositions, he's frequently seen in jazz festivals and jazz clubs the world round. The Aye album features his eBraam performing Braam's own jazz-rock compositions written specially for my ballet: "Introduction," "Aye Aye At Work." "Small Meets Big," "Prison vs Dreamy Freedom," "Restful Peaceful," "Bad Weather," "Enclosure To Enclosure," "Escape," "Happy March," and "Love". Braam manages to inject his infectious skill and enthusiasm into the sequences to make every track fresh and cheerful. Each one is given a nice tempo treatment in a breezy ride from start to finish. Dean adds his share of the soothsayer's touch to the whole endeavor, and his work is surely a highlight of it all.

The music was recorded, edited, mixed and mastered by Sebastiaan van Bijleveld for Galloway Studio in Niemejen, Netherlands.

Will the narrator be seen on a screen or will it just be his voice that is heard?

Not this time and not for the Martha Graham either. You know?... the cd is out...may be in the future...I’m thinking on a performance in Arabic. I love that language. It’s not new stuff. I lived some months in Marrakech with a man I fell in love with a very well known chef, Bernard Guilhaudin ex chef Tour d'Argent, but at that moment he was working at a Palace called la Mamounia. We traveled all around Maroc even to the dessert close to Ourzazate. I love Arabian culture. They were long time mixed with the Spanish culture until the Inquisition… well that’s another story...anyway I never forgot how enchanting were the sounds early in the mornings and those odours in the zouk, the dance and poetry; so many beautiful things that later I found again in Palestine where lives the most spiritual person, a beautiful soul and great professional in his area; so yeah, I’m thinking on doing something magic but it has to be unique so I need time to brew in my head. Isn't it interesting all of this? Nelson Mandela always said that South Africa's freedom will always be incomplete without the freedom of the Palestinians. That’s very important to me.

I have approached Jeanette Bougrab, who I really admire a lot, saw her in Helsinki and we had this idea for Monseigneur; it couldn't happen with her but I hope other ideas come true either with her or with other persons. I was also approached by Richard Attias and associates; we lost touch in December. I'm not very good keeping up with people; I kind of drive my camel alone (laugh loud). The museum of Monseigneur Tutu needs benefactors. I hope all come true. Though France is my country, the place where I could be what I am now, the country that gave me everything, I consider myself a woman without roots and that my friend is fabulous because I belong to other galaxies. I think wherever I can carry joy and a compassionate heart, things can work out. When I find lies and manipulations I just turn my back. I have no time for negativity in my life. The Musical Forest has only positive vibes, babe! (cracking laughter here)

The presentation of “The Aye Show” in honor of Desmond Tutu’s 85th Birthday on October 7 was sold out and a huge success. There will be an encore appearance to celebrate Unsung Heroes Day November 15. Stay tuned!