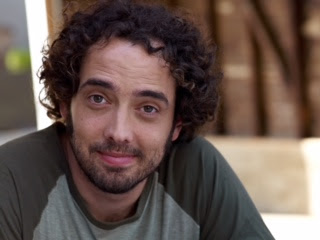 Scott Rognlien (Adaptor/Director/Producer) will have a world premiere of his latest work, VONNEGUT, USA running October 14 – November 20, at the Atwater Village Theatre in Los Angeles, CA.  The work is an adaptation of five Vonnegut short stories presented as one continuous 90 minute piece. Members of The Next Arena, a theatre company founded by Scott and friends, are performing in and producing the six week run.

Scott’s work as a director has been seen in Chicago, England, Central Oregon, and Los Angeles.  With The Next Arena, Scott directed No Exit, We Won’t Pay! We Won’t Pay!, The Angry Guy in the Pink Hat and the critically acclaimed Von Bach.  Also with TNA, he adapted and performed Vladimir Nabokov’s Invitation to a Beheading for the stage.  Scott is the Artistic Director and a founding member of The Next Arena, and is a graduate of Northwestern University’s Performance Studies Department.

How and when did you first become interested in Performance Art?

I studied at Northwestern University in their Performance Studies department.  Early on I adapted an excerpt from TS Eliot's The Wasteland and was instantly hooked on interpretive forms of performance.  There were so many directions one could go with this style of performance that I became fascinated with finding new ways to tell live stories that went beyond what I had been taught about traditional theatre.

It’s a lot of work starting a theatre company.  What was the reason or purpose of starting The Next Arena?  How did you go about finding members interested in joining a new company with an eclectic mission?

Mostly it was friends that were actors and writers that I knew from college that wanted to start the company.  Like most young artists in LA, we were all looking for creative work to do while we were waiting for the phone to ring.  By doing plays, we were able to choose our own material and do the work exactly how we wanted.  The level of control with theatre is great as it's relatively inexpensive and it's a wonderful collaborative effort.  We started creating our own material early on and that became our main goal as we got better at producing shows.  This way we could develop a production all the way from top to bottom.

What was it about Kurt Vonnegut’s writing or short stories that caught your attention?

I think it’s Vonneguts’s  narrative voice that attracted me most of all.  His themes and characters are wonderful and capture a great picture of humanity, but the way he tells the story has always been my favorite part.  He commentates.  He jumps around in time. Sometimes he even shows up in the stories himself.  I always feel like this tall, lanky fella decided to sit down and personally tell me stories.  It's a very intimate experience to read his stories.

How did you go about developing the piece?

Once I found the 5 stories I wanted to use in the piece, I set about putting them together in various ways over the course of a number of drafts.  I would have readings with our company members where they would give me notes and suggestions.  We also had an informal stage reading of one of the more recent drafts where audience members weighed in on the piece.  These stages of development were integral to helping me figure out how to tell the stories in a cohesive and streamlined way.

What was the biggest challenge bringing this project to fruition?

There were many challenges in trying to connect 5 different stories into one continuous piece of theatre, but the biggest challenge for me as the adaptor was to live up to Kurt's visions and words.  I had to write some original dialog and sequences to connect the worlds of the stories and I tried to emulate his style as best I could.  It's a big, unique voice to live up to and I always hoped he would be happy with the final result.

What do you want the audience 'take away’ to be?

I hope that those who haven't read much, if any, Vonnegut will be motivated to go out and read more of his work.  His messages and themes are so timeless and wise and so beautifully human.  This play in particular highlights stories of progress, both industrial and social.  The 1950s and early 60s were a time of great change in America.  I hope audience members come away with an appreciation for the ups and downs of that time, and how it affected humans at a very basic level.  These themes still resonate today.