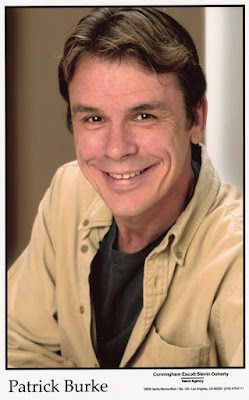 When did you get interested in puppets and puppetry?

When I was a pre-schooler.  As an infant, then a toddler I had a history of de-hydrating.  I was regularly admitted to the hospital in my hometown of Concord, New Hampshire. The pediatric ward would give each child a puppet when they were discharged from the hospital. By the age of 5, I had a collection and began requesting puppets as gifts.


Did performing with puppets lead you to wanting to work on stage as an actor?  How did that transition happen?

My parents briefly owned and operated a diner.  My mother wrote in my baby book that at the age of 3 they would put me on the counter and I would sing to customers "He's got the whole world in his hands" ! HA ! I guess I was born a ham. I acted in my first non-school play at the age of 7 at the local YMCA.


You’ve been an active member of the Group Rep for years, as an actor, producer, and directing projects.  The Group Rep is not known for having musicals on their season schedules.  How did AVENUE Q get on the 2019 Season Schedule?

I have just always had a passion for AVENUE Q since I saw it on Broadway in August of 2003.  At the Group Rep, members are encouraged to present projects which are performed in front of the company following the Monday night membership meeting. I approached fellow member Paul Cady, a wonderful pianist, and discovered that he loved the show too. Our Co-Artistic Directors and the Artistic council enjoyed the presentation and decided to put it in the 2019 season.

How did you prepare to direct a musical?

I have performed in many musicals myself and learned a great deal from the men and women that have directed me.   For this particular show my puppeteer training was a plus. I trained with both Kevin Carlson and the late Michael Earl, both had worked extensively with the Henson Company. Kevin Carlson still puppeteers in Henson Company films.  The late Michael Earl worked on Sesame Street in the 60s and 70s.


What has been your biggest challenge with the show?

The off stage switching of the puppets was a nightmare in the rehearsal process. The actors play more than one character. Often both of their characters are on stage with a different puppeteer holding the puppet. The actor still voices the character even though they are not holding it.  Sometimes I felt like I was doing a puzzle!   I did build two "Kate Monsters" and two "Princetons" just to make entrances and exits a little easier.


I heard that, in order to save several thousands of dollars, you set on the task of building the puppets yourself.   That seems like a daunting task – how did you accomplish it?

Many late nights.  Creating the puppet's face can often be frustrating.  One  little mistake and you have to start over.  I did have a lot of help from fellow GRT members Lisa McGee Mann and Stephanie Colet. We had a great deal of fun together.

What do you want the audience take away to be having seen the show?

In directing this I tried to get my actors to just simply have FUN onstage. I hope the sense of childlike fun will translate to the audience.  I was blessed with an AMAZING cast for this show and can honestly say I love each and every one of them.


Is there anything else you’d like us to know about you?

I have worked for over 20 years in motion picture film restoration.