Singer D Scott Eads was just nominated for a BroadwayWorld Award for his phenomenal show Shake the House presented at Sterling's Upstairs at the Federal in September. In our conversation he talks about his nomination and his upcoming show Christmastime in the Key of Bing this coming Sunday December 1, once again at Sterling's Upstairs at the Federal. 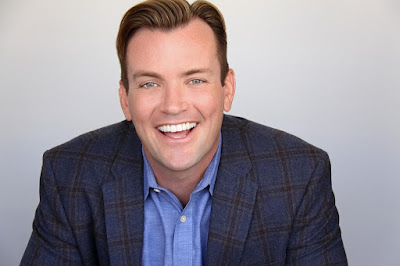 How does it feel to be nominated for a BWW Award?

It's very validating and gratifying to be recognized in this nomination, so it feels great! I have had a very busy year crafting and launching three different shows from three different eras and categories of music - with great audience response for each - and it's helped me grow in many ways. Without being cliche, it has been quite a journey. I really challenged myself on many levels and was also dealt some unexpected challenges but all-in-all, everything I've been through has been a growth experience and helped me become a better artist.

How do you feel about your show Shake the House? It was for me one of your best.

I'm very proud of it and feel that it was a watershed moment for me. I've been singing those songs since I was a kid - they're literally in my bones - but I've never sung them in any public capacity. I honestly didn't know how it would work out but I needed to bring more movement into my work and share that part of me on stage so I chose some of my all-time favorites "rock and roll" songs and got lucky enough to get a great MD in David Arana. He put together a phenomenal band - I was blown away at our first rehearsal - and the result was amazing. It felt right. It felt really good.

Absolutely! I am not a big celebrator of birthdays - especially my own - but I'm hitting the half-c in 2020 and would love to have a big dance-mix party to celebrate it! If it happens, it'll be the 50s and 60s of Shake The House, with a heavy dose of 80s and some early 90s to top it off. I love so many different songs from the 80s and early 90s and have too many favorite artists to list but if you were there now, you'd probably hear at least one song from Prince, The Eurythmics, George Michael, INXS, R.E.M., Siouxsie and the Banshees, Duran Duran, Madonna, Elton John, Billy Joel, Abba, Queen, Aerosmith... And many more! (pun intended)

Tell our readers about your next show on December 1.

I'm really excited about this one! I'm a huge fan of the old Christmas specials from Bing, Frank, Dean and Andy Williams and designed the show with them in mind. It's going to have costumed carolers, vintage Christmas readings, a sleighful of classic Christmas songs and a few surprises for the audience that should be a lot of fun. Christmas is my favorite holiday and I really want to celebrate the positivity and inclusiveness of it with this show, as well as the magic and beauty of it all.

Do you have a favorite style of singing yet to be explored?

I am open to many musical styles and plan on exploring more of them through my work. At this stage, if I can wrap my voice around it, it's fair game. I have a background in acting and have also done some writing, so in looking forward to new works, I have areas or themes I want to explore in more of a storyteller capacity in order to provide more of an emotionally resonant experience for the listener. I'm particularly fascinated with the social impact of songs on various demographics and I have a couple of ideas that I'm working on but nothing definite yet apart from having some fun on my birthday.

Remember Christmastime in the Key of Bing at Sterling's Upstairs at the Federal Sunday December 1. The Federal is located at 5303 Lankershim Blvd North Hollywood. Doors open for dinner at 5: 30. Showtime at 7 pm. Call 818-838-3006 ext # 1 for reservations.
Posted by Don Grigware at 7:27 AM