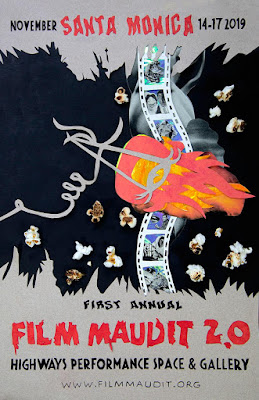 Artistic director Patrick Kennelly took time from his busy schedule to discuss the festival in grand detail. I am thrilled to say that from the sound of the entries I would run, not walk, to get tickets for this splendid event, as should you. 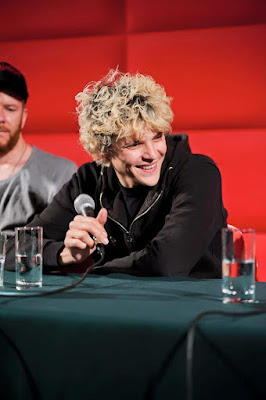 Describe in your own words what Film Maudit 2.0 signifies.

PK: Film Maudit are films that in ambition bite off way more than the mainstream (including the “Sundance mainstream”) would normally chew. They’re works that are deliberately bold in their choice of subject matter and aesthetics and consistently challenge themselves and audiences, while still being entertaining as hell. The idea is to buck the trend of “like” culture, where we’re only exposing ourselves (whether we like it or not) to stuff we’re already supposed to like (y’know, that is “Like" something we’ve bought before, watched before). This is not Netflix film programming. Film Maudit is guaranteed to raise your guard and beat through with its cinematic audaciousness.

When you say censored films, are you referring to those that are primarily gay in content? Sounds like the days of Oscar Wilde. Joe Orton's films were brilliant and would most likely fit in here.

PK: The films in the festival, 50% of which are directed by women, encompass many different countries, sexual identities, and genres. A through-line of out-there-ness runs through everything. Pretty much all of them are L.A. premieres, including the features, and part of the purpose of Film Maudit is to give local exposure on the Big Screen to those films from Africa to Mexico to our very own backyard, that might be, for whatever reason, hot potatoes for other fests. There is a particular love here for films that use and abuse the trappings of genre cinema to get at other things.

This is the inaugural film festival. Do you hope to make this an annual event?

PK: Yes, this is the beginning of something that we hope will have a long life, and expand beyond being, you know, ANOTHER film festival. In this first year we have special screenings and music events, but we have big plans to bring in more performance, readings, visual art, and food. To have something that really reflects the platform-less age of tomorrow. A # of the creators involved in this first showcase, not only make films, but work in VR (Virtual Reality), gaming, gallery-based arts, literature and the theater.

How does this festival work within the mission statement of Highways?

PK: Film Maudit 2.0 is an extension of Highways’ mission to develop and present innovative artists, promote interaction among people of diverse cultural backgrounds, and engage artists and the communities they serve in cross-cultural dialogues about social, cultural and artistic issues.

Has your audience built steadily over the past few years? I have seen some wonderful theatrical pieces here in the past. It's definitely a place for theatre and film buffs to gather and exult in your choices of outre work. It's a one of a kind place in its design and in the subject matter presented.

PK: There’s been consistently inconsistent audiences throughout the 30 years of Highways’ existence! It continually ebbs and flows based on the dynamics of the Los Angeles performance, dance and art scene at any given moment in time (even week to week). Communities have come and gone, and sometimes come back again, new ones to fill the gap. There is a consistent re-history, we which love - the book being written on the space and the overall landscape over and over in a uniquely personal way by hundreds of artists. Our continually morphing identity as a space reflects that. We’re grassroots, experimental and diverse beyond measure - all ingredients for something that doesn’t spell long life, but, thanks to the hard-work of Executive Director Leo Garcia and his leadership of the Highways staff, we’ve been able to do it!

Tell our readers anything you wish that I have not mentioned.

PK: Whether you love them or hate them, I recommend that you won’t be bored by the radical narratives and styles we have on display as part of the festival - for much less $ than it will take you to be “shocked” by THE JOKER. If you want something that truly gets under your skin - come out to any of our programs!