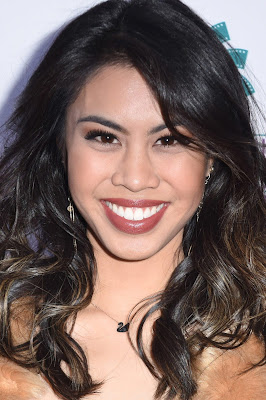 Filipino/American actress Ashley Argota is known for her roles on television, such as Lulu on the Nickelodeon sitcom True Jackson, VP,[2] and Kelly Peckinpaugh on the Nickelodeon sitcom Bucket & Skinner's Epic Adventures. She is no stranger to the stage either, creating diverse characters over the years in the Lythgoe Family Pantos. In our talk, Argota talks about playing Tinkerbell in this year's Panto at Laguna Playhouse entitled Peter Pan and Tinker Bell, A Pirate's Christmas, playing December 4 through the 29th.

This is no ordinary Tinker Bell. Tell us about how the Panto brings your character to life.

In our production, Tinkerbell is sassy and super protective of her relationship with Peter. She can sometimes come off as rude, but she's really just passionate and unafraid to speak her mind. She leaves a trail of fairy dust and loud opinions everywhere she goes.

How different is playing Tink from Belle in Beauty and the Beast?

Well, the biggest difference is how they get around. Tink skates around on Heely's the entire show! She doesn't fly in our production, but we couldn't just let her walk around-- she IS a fairy after all!! Belle and Tink are both similar in that they are strong, fearless women who aren't afraid to stand up for what they believe in, but they certainly go about it in different ways. Tinkerbell isn't afraid to speak her mind as loudly as possible, and Belle prefers a calmer approach when resolving issues.

Are you having fun playing in the Panto? What do you like best about it?

The Pantos have become a staple of my year. My first one was Aladdin six years ago, where I played Jasmine. I was immediately hooked. The shows are so much fun to do, and watching the kids in the audience light up when they see their favorite fairy tale characters come to life, or when they hear their favorite song, or laugh at a funny joke, is just incredible. The Pantos are fun for both kids and their parents, and I love how it brings families together for the holidays. I've also met some of my closest friends doing these shows! I've been so fortunate to be a part of this world for so many years.

Tinker Bell must have contact with the kids. She must be their heroine. Without giving too much away, what does she do?

Tink faces her fears and even puts herself in harms way to help Peter Pan defeat Captain Hook and the evil Pirates when they mess with the people she loves the most!

Tell our readers about your castmates and director BT McNicholl.

Our cast is so rad. I've worked with a few of them before on various Pantos, so it's been fun to basically get to goof off with my friends on stage. And the ones I've just met during our rehearsal process I've quickly bonded with. BT has found so many funny bits for us to do, but most importantly, he's filled the show with so much heart. Everyone is so talented and hilarious, and I really think Laguna is in for another great Panto this year!

For more info and to purchase tix, go to:
https://lagunaplayhouse.com/2019-2020-special-performances/peter-pan/
Posted by Don Grigware at 2:37 PM