Singer Terron Brooks and The Soul of Broadway - Impossible Dreams

Actor/singer/songwriter Terron Brooks is best known for his portrayal of Eddie Kendricks in the1998 NBC Emmy winning miniseries The Temptations. On Broadway he played Simba in The Lion King and Seaweed in Hairspray. Brooks is about to release a solo album entitled The Soul of Broadway - Impossible Dreams. I have heard some of the mastered tracks and his range and delivery are nothing short of amazing. The voice is pure velvet. On Sunday November 3, he will perform in concert at the Montalban in Hollywood, where the new CD will be available. In our conversation he talks passionately about the CD and the concert.

Tell our readers in detail about your new album The Soul of Broadway - Impossible Dreams, and why it is so important for you to make these songs fresh for today's audience. 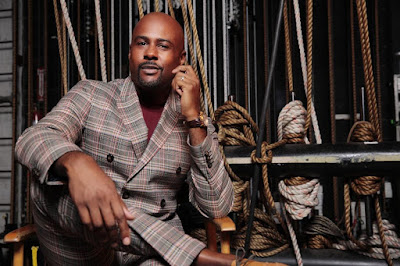 TB:I wanted to share these classic songs with everyone. Not just the Broadway community and Broadway lovers. Taking the songs out of the theater character story and reimagining them with a soul sensibility breathes new life into them and lets the listener hear them in ways that hopefully relates to their own story. I approached them as if I wrote them and infused my story into the narrative. We tried not to limit ourselves to genre and just make good music that connects universally.
Will you do songs from the album exclusively in the concert or will there be others? Give us an example or two.
TB: We will be performing most of the album, except for maybe one or two. The show however is not exclusive to the recorded material, although it is also a record release concert.  It is the launch of a new creative concept... songs from Hamilton, Dear Evan Hansen, and Les Miserables, which are not on the album, for example, but will be performed during our show. We're keeping a little mystery for our audience but a few songs on the record include "The Music of the Night" (The Phantom of the Opera), "Something's Coming" (West Side Story) and "The Impossible Dream" (Man of La Mancha).
Is the orchestra for the concert the same as on the CD? Tell our readers why it is so wonderful to work with the same musicians who assuredly elevate and inspire you.
TB: The musicians are so important. They inform the emotions that the songs grow to become. The band—led by Mark Vogel, the Music Director and Executive Producer of The Soul of Broadway record—is roughly half studio musicians on the record plus new members who most certainly bring enthusiasm and soul to the live experience. Add to that three phenomenal vocalists, who we call The Soul Singers, who just happen to be friends of mine. It was essential to have Mark on board because as one of the co-creators of the music, he knows the music inside and out. During the recording process there were many magical moments that just organically happened because we share the same sensibility. The music led us many times and we followed without ego or attachments.
What do you hope audiences will take away from the evening of song? Talk particularly about how you hope to shape their hopes and dreams.
TB: Well, the show is called Impossible Dreams. So of course, the theme is reaching for the impossible. I'm using the backdrop of my own journey to hopefully shine a light where others may find themselves in their own life. I'm hoping my vulnerability will help to inspire others to define their own success and find their voice while bringing people of all walks together. Music is a great connector and if one person leaves with more hope, determination and empathy, then we've done our jobs. I'll be living my dream in real time November 3rd!
Tell us about your association with your wonderful producer/director Brian Purcell. How long have you known each other? Why is he the perfect collaborator for this project?
TB: Brian Purcell was one of my employers and band mates in America's favorite mashup group, The Company Men, which I'm still a proud member of now. We've known each other for many years but over the course of the last four years we've formed a great friendship first and a new partnership with his company 4 Times Entertainment, along with his wife Leah. Brian is the perfect collaborator because he sees me. He understands emotionally what my intentions are with music and has the talent and creative energy to bring it all to life without ever losing authenticity and soul. Everyone needs someone in their corner who ignites their dreams and humbly pushes you to think outside the box and dream bigger. Brian is a visionary and I cannot wait for audiences to witness this experience, which will be like no other.
What I'm most excited about is creating a show where I can be me. No pretense. I think we've created something unique and familair at the same time. Audiences have the chance to be there at the very beginning of an impossible dream coming to life. And my record, which has stretched me the most, will be available that evening before its release later in the week to the rest of the world.

For more information and to purchase tix, go to: