The Road Theatre on Magnolia is proud to present The Spanish Prayer Book by Angela J. Davis and directed by Lee Sankowich. The fascinating historical play about the power of art to forge human connections had its official opening on Friday September 20 and plays until November 10. Each week we will spotlight a cast member. This week the light shines on Amy Tolsky. 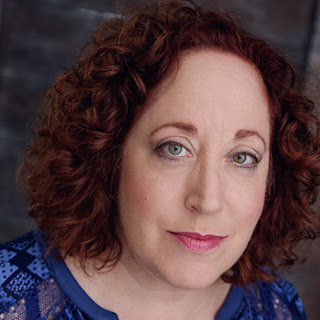 What character do you play in Spanish Prayer Book? How does she contribute to the play?

I’m the triple role of The Auction House Assistant, Law Clerk and Customs Official. Basically, the comic relief in this mostly serious piece.
Any challenges to overcome as an actor?


A fun challenge! All three roles are British so we had to make them look and sound very different. I used three different wigs and gave the characters three distinctive regional sounds, thanks to our dialect coach Tracy Winters: upper class plummy RP, middle to lower class London, and a Northern Yorkshire sound. I also gave the characters a different physicality and personality which helped to differentiate them.

What to you is the message of the play?

This play isn't about one thing. There are many subjects covered including The Holocaust, survival, ethics, cultural treasures, art, religion, adultery, ownership, love, identity, legal rights, entitlement, family, legacy and faith. Maybe the message is that decisions need to be carefully considered and one must look deep inside but be willing to compromise to do what's right for the sake of your family and the future of humanity.

Talk about your director and fellow castmates.

Our director Lee Sankowich is a very collaborative and easy-going presence during the rehearsal process. He trusts his actors to find their way and gives a lot of freedom to the actors. If something isn't quite working, he will suggest trying a different approach either with the interpretation of the text or changing the blocking to serve the play better and tell the story in a clear and concise manner. The cast as a whole are all lovely people. I've worked with Laura, Allan and Carlos before on readings but thrilled to have the chance to work with them (as well as Allison, Tiffany and RJ) on a full production!

What do you hope will be the audience takeaway?

There are a lot of ideas floating around this play. I hope the audiences will enjoy the production (both the acting and technical aspects) and possibly debate the issues after. Theatre is meant to entertain but also give people food for thought.
The Road on Magnolia is located in the NoHo Senior Arts Colony at 10747 Magnolia Blvd. There is plenty of street parking but allow yourself plenty of time. Tickets may be purchased at 818- 761-8838.